The Startup Wife by Tahmima Anam

“People say there’s no such thing as Utopia, but they’re wrong. I’ve seen it myself, and it’s on the corner of Tenth Avenue and Fifteenth Street.”

Brilliant coder and possessor of a Pi tattoo, Asha is poised to revolutionize artificial intelligence when she is reunited with her high school crush, Cyrus Jones.

Cyrus inspires Asha to write a new algorithm. Before she knows it, she’s abandoned her PhD program, they’ve exchanged vows, and gone to work at an exclusive tech incubator called Utopia.

The platform creates a sensation, with millions of users seeking personalized rituals every day. Will Cyrus and Asha’s marriage survive the pressures of sudden fame, or will she become overshadowed by the man everyone is calling the new messiah? 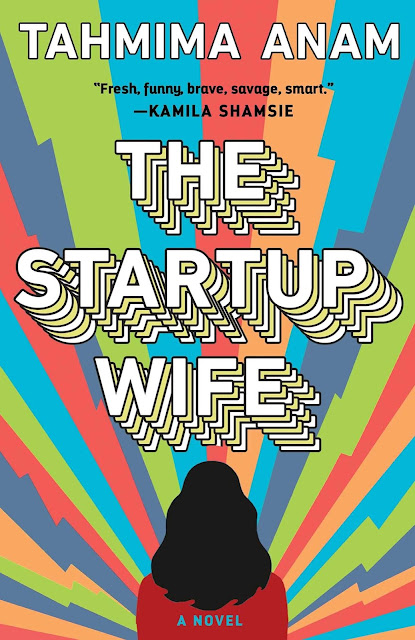 What I thought
This novel flowed, just like a startup, from idea to IPO, cover to cover. I found myself doing something I rarely do with books, or at least that I haven’t done for a while. I savoured this one.
This book was different in that I indulged a little each day over the course of a few days, taking in just a couple of chapters at a time. I looked forward to each night curled up on the sofa, with a cup of tea, reading about Asha and her WAI startup.
Anam sets the scene of Utopia right away and manages to capture the ridiculousness of startup culture so accurately that the book is hilarious at times.
“The cafe downstairs is vegan, nut-free, gluten-free, and actually free. All you have to do is fill out a survey on your way out. We get three coffee hemp mylkshakes with extra CBD shots and settle ourselves in a corner with a view of the Hudson.”
I felt invested in the characters from the beginning and enjoyed watching them evolve with the plot. I especially loved Li Ann and found that Tahmima didn’t even need to describe her, I could just picture her in my mind. Li Ann has a little spark within her and I adored her ever expanding entrepreneurial imagination. She embodies so many of the traits of those working in startup culture.
“Li Ann appears. She’s holding a mini fire extinguisher in one hand and a hardcover of Michelle Obama’s Becoming in the other.”
At the heart of this novel, there seemed to be a clear message. We need more women in technology.
I appreciated the Anam’s attention to detail in writing about this, the fact that it was noticeable but also subtle. Had it been overpowering, it might have taken away from the beautiful love story between Asha and Cyrus, which grew increasingly more interesting as the novel progressed.
“But we’re more than married. We are epic.” Cyrus pulls me into his arms. “We are infinite.”
To conclude, this was a very enjoyable read, and a frighteningly accurate portrayal of life in a startup incubator.
Tahmima Anam is the recipient of a Commonwealth Writers Prize, an O. Henry Prize, and has been named one of Granta’s Best Young British Novelists. She is a contributing opinion writer for The New York Times and was recently elected as a Fellow of the Royal Society of Literature. Born in Dhaka, Bangladesh, she was educated at Mount Holyoke College and Harvard University and now lives in London where she is on the board of ROLI, a music tech company founded by her husband.

The Startup Wife is available to purchase at Indigo and on Kobo. Check GoodReads for additional retailers.

Thank you to Simon & Schuster, Scribner Books, and NetGalley for the ARC.