The Great Believers by Rebecca Makkai

“And was friendship that different in the end from love? You took the possibility of sex out of it, and it was all about the moment anyway. Being here, right now, in someone’s life. Making room for someone in yours.”
THE GREAT BELIEVERS

In 1985, Yale Tishman, the development director for an art gallery in Chicago, is about to pull off an amazing coup, bringing in an extraordinary collection of 1920s paintings as a gift to the gallery. Yet as his career begins to flourish, the carnage of the AIDS epidemic grows around him. One by one, his friends are dying and after his friend Nico's funeral, the virus circles closer and closer to Yale himself. Soon the only person he has left is Fiona, Nico's little sister.

Thirty years later, Fiona is in Paris tracking down her estranged daughter who disappeared into a cult. While staying with an old friend, a famous photographer who documented the Chicago crisis, she finds herself finally grappling with the devastating ways AIDS affected her life and her relationship with her daughter. The two intertwining stories take us through the heartbreak of the eighties and the chaos of the modern world, as both Yale and Fiona struggle to find goodness in the midst of disaster. 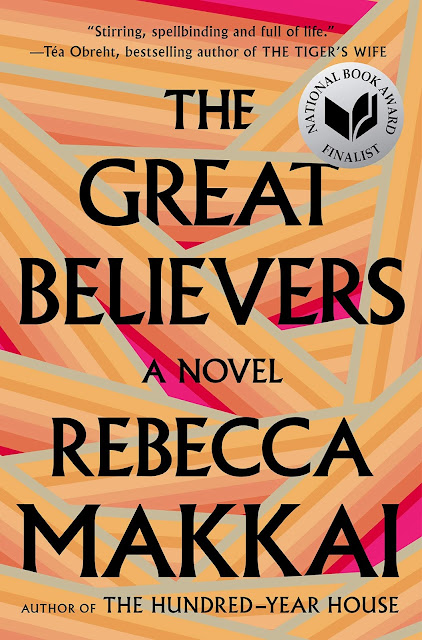 A novel with strong themes of love, loss, trauma, and friendship, Rebecca Makkai's The Great Believers opens in 1985, at the funeral of Nico, whose life has just been stolen by AIDS.
“Nico had been bright and beautiful. Flowers would do no good,” Makkai writes.
Nico, who lived his life in Chicago, was one of many at the time taking his last breaths due to the tragedy of the AIDS epidemic that was holding the world stage hostage in the 1980s.
“How empty do you think that church is?” Yale, one of the novel's protagonists, and Nico's best friend says to Charlie.
“It must only be relatives up at the church, the parents' friends, the priest.” It's clear from the outset that the friends of Nico are unwelcome at the service.
The opening scene, as written above, is heart-wrenching.
The novel then moves forward to 2015 in Paris, where the reader has more of an opportunity to meet another protagonist, Fiona, Nico's sister. This begins what will be a switching back and forth between 1985 and the present.
The Great Believers is a work of fiction that reads like nonfiction, however still, it's hard to know the true extent of the AIDS epidemic in the 1980s, and the earth-shattering turmoil that it left in its wake.
I felt it important to include a brief timeline of the devastating events as they played out around the world.¹
The AIDS epidemic continued beyond this point, but since Makkai's novel is set in the 1980s, that's all I wanted to focus on here, and above I captured a small moment of what was happening around the world at that time.
There was so much pain, tragedy, and reckoning, that it cannot be described in post. There are many resources available online, and I recommend a Google search if you are interested in learning more about the HIV/AIDS epidemic and how it played out over time.
Review
This book was an incredible accomplishment. It was incredibly well researched, and took the reader back to those horrifying days in the 80s.
It was beautifully written, and her Makkai's delivery from start to finish was impeccable. The Great Believers leaves the reader with a desire to learn more about the HIV/AIDS epidemic, with its deeply moving and thought-provoking prose.
The book flows seamlessly between the passages of time, with Rebecca capturing the differences between the then and now.
Rebecca Makkai is the Chicago-based author of the novels The Great Believers, The Hundred-Year House, and The Borrower, as well as the short story collection Music for Wartime. The Great Believers was a finalist for the Pulitzer Prize and the National Book Award, and received the ALA Carnegie Medal and the LA Times Book Prize, among other honours. Makkai is on the MFA faculties of Sierra Nevada College and Northwestern University, and she is the Artistic Director of StoryStudio Chicago.

The Great Believers is available at Indigo and on Kobo. Check Penguin Random House CA for additional retailers.