“I couldn’t deny that people were rallying to my side. My sisters. My friends. The strip mall shop owners. Three hundred strangers on Facebook. People were stepping forward and giving me advice and support and encouragement and, yes, love.”

On Valentine’s Day 2019, someone stole Steven Carino’s dog, Oliver, from his car. Having lost his mother at thirteen and grown up with an alcoholic father, he could always count on his dogs for comfort and company. But now, with his beloved Oliver missing, Steven felt utterly alone.

Then, the miracle. In a series of near-impossible coincidences, people from different walks of life crossed paths with Oliver and with Steven. Hardworking immigrants, wealthy suburbanites, car mechanics, deli workers, old friends, close relatives, street cops, gang members, a TV news reporter, social media followers around the world, and one very gifted hairdresser all played a part in Steven’s desperate journey to find Oliver. In the middle of it all, Steven realized that no one is ever truly alone—and that the power of community can be life-changing. 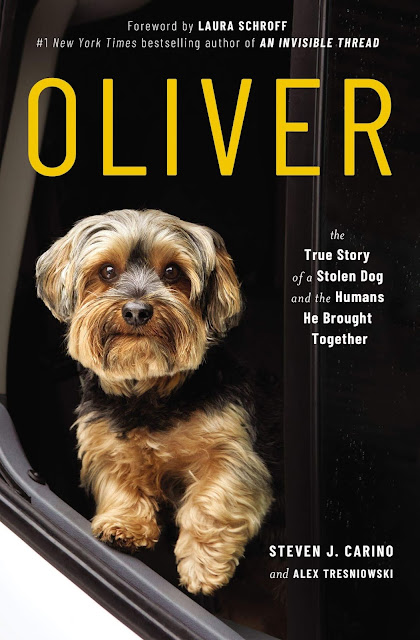 Dog lovers, prepare a box of tissues for this one!

I felt compelled to read this as a dog lover and owner, and held my little guy Tanto as close as I possibly could throughout reading this entire book.

The tale of Oliver being taken is interwoven with stories of Steven's mother's battle with cancer and her eventual passing to the disease when he was thirteen, his tumultuous relationship with his unstable father, and his own self-destructive drinking habits.

All of these stories between talking about the loss of his little pup really added more depth and layering to the overall book and made for a more engaging read.

I felt like I really got the opportunity to know Steven and came to understand why his relationship with Oliver was so important.

This was both a tragic and uplifting story. A story that shows the power of what can happen when family, friends, and the community at large come together. A story that shows that if you just ask for help when you need it, you might be surprised at the strong show of support from those around you, especially strangers whom you've never encountered before.

Between chapters, I would find myself staring down at my own little guy and see his big brown eyes just looking up at me. I just couldn't imagine ever losing him or having him taken from me. Just like Oliver is to Steven, Tanto is my lifeline, and without him the world would be a much darker place.

This book is wonderful for dog owners and lovers everywhere. You'll cry, you'll smile, and you'll definitely give your dog some extra love and attention after reading it. This was a beautifully written story. 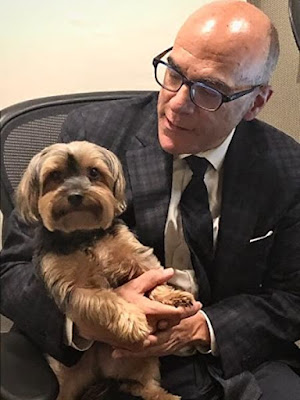 Steven Carino was born in Huntington, New York. The youngest of five children, he graduated from SUNY Brockport with a Bachelor of Science in American History. He worked as a DJ in New York City before launching careers in advertising and real estate and starting his own employment agency. Today, Steven has his own driving business and lives in a cottage in Bedford, New York, with his best friend, Oliver, and an array of sheep, goats, chickens, a horse, a rooster, and a mini-cow named Anna Belle. Oliver is Steven’s first book.

Alex Tresniowski is a writer living and working in New York City. He has been a senior writer for PEOPLE magazine since 1998, writing dozens of cover stories and focusing on human interest, crime and sports. He is also the author of six books, including 2005’s THE VENDETTA, a true-crime story that was purchased by Universal Pictures and used as a basis for the 2009 Johnny Depp movie Public Enemies.

Oliver: The True Story of a Stolen Dog and the Humans He Brought Together is available for purchase in paperback at Indigo and in e-book format on Kobo. Check GoodReads for additional retailers.