“Malibu catches fire. It is simply what Malibu does from time to time. Tornadoes take the flatlands of the Midwest. Floods rise in the American South. Hurricanes rage against the Gulf of Mexico. And California burns.”

Malibu: August 1983. It's the day of Nina Riva's annual end-of-summer party, and anticipation is at a fever pitch. Everyone wants to be around the famous Rivas: Nina, the talented surfer and supermodel; brothers Jay and Hud, one a championship surfer, the other a renowned photographer; and their adored baby sister, Kit. Together the siblings are a source of fascination in Malibu and the world over--especially as the offspring of the legendary singer Mick Riva.
The only person not looking forward to the party of the year is Nina herself, who never wanted to be the centre of attention, and who has also just been very publicly abandoned by her pro tennis player husband. Oh, and maybe Hud—because it is long pastime for him to confess something to the brother from whom he's been inseparable since birth.
Jay, on the other hand, is counting the minutes until nightfall, when the girl he can't stop thinking about promised she'll be there.
And Kit has a couple secrets of her own--including a guest she invited without consulting anyone.
By midnight the party will be completely out of control. By morning, the Riva mansion will have gone up in flames. But before that first spark in the early hours before dawn, the alcohol will flow, the music will play, and the loves and secrets that shaped this family's generations will all come bubbling to the surface.
Malibu Rising is a story about one unforgettable night in the life of a family: the night they each have to choose what they will keep from the people who made them... and what they will leave behind. 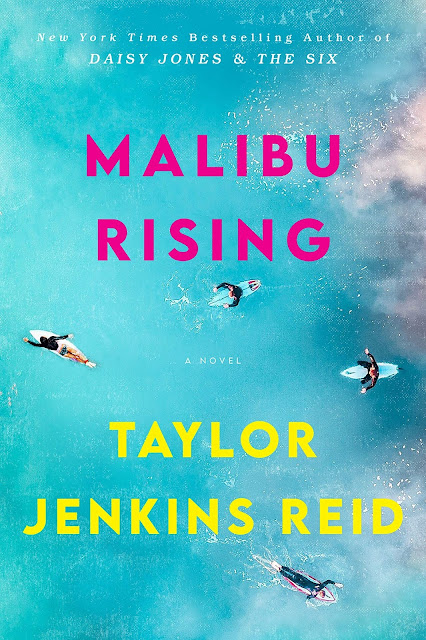 What I thought
Seeing this novel just about everywhere, stacked high on the shelves of every bookstore, each shop satiated by its presence. It’s hard to scroll through Instagram without seeing its captivating bright blue cover. Taylor Jenkins Reid had created a narrative so compelling that just about everyone wanted to read it.
I had to read it. I listened to the audiobook as well, for the full effect.
Malibu Rising takes the reader on an adventurous journey back in time to the beach community of Malibu, a city with 21 miles of coastline, which lie along the Pacific Coast Highway.
Right away, I felt drawn into Reid's seductive and vividly descriptive prose. She so skilfully describes the scenes of Malibu, catapulting the reader directly to the exclusive colony that houses many of the world’s most well-known celebrities.
“Sure, your neighbor might be in a few movies, but Malibu was a place to live, like any other. It was where you brushed your teeth and burned dinner and ran errands, just with a view of the Pacific.”
Reid captures the essence of those who call Malibu home so accurately, giving life to each of the Riva kids. She paints an delicious picture of wealth, power, fame, lies, and betrayal that commands the reader’s attention from start to finish.
“But with vistas this beautiful, it had been only a matter of time before the filthy rich showed up.”
A story that flows like the waves that hit the Malibu shoreline, active and engaging, Malibu Rising is thrilling, fast-paced, and completely addictive.
Audiobook
The audiobook is narrated by Julia Whelan. It took some getting used to her voice, but I soon felt her raspy and whispering tone rippling through me. Her voice is breathy and neutral at the beginning, then really picks up as the plot develops. I found the subtle shifts in her volume to be audible clues for the shifting speakers, which made it easier to distinguish between the characters that appear, especially at the party. In a book with so many characters, she did an excellent job. I loved her passion when portraying Nina, one of the protagonists. Julia’s tone is a great match for the fast-paced storyline.
About the author
Taylor Jenkins Reid is the New York Times bestselling author of seven novels, including Daisy Jones & The Six and The Seven Husbands of Evelyn Hugo. She lives in Los Angeles with her husband and their daughter.
About the narrator
Julia Whelan is an actor, writer, and narrator of over 400 audiobooks. Recently named one of AudioFile magazine's Golden Voices, she has won numerous other awards, including the 2019 Best Female Narrator Audie for Tara Westover's Educated and a SOVAS for the performance of her own novel, My Oxford Year. She is also a Grammy-nominated audiobook director as well as a certified tea sommelier.

Malibu Rising is available for purchase in paperback at Indigo and in e-book or audiobook format on Kobo. Check Penguin Random House CA for additional retailers.