“The joy I saw there was ferocious and the sadness suffocatingly cold. Blues thrown onto the canvas warred with yellows approaching like tornadoes. People gathered round aghast to watch a circus spin to life. Above a city of snow, a man in white robes closed his eyes and prayed. Every painting was a moment of destruction coinciding with the birth of something wonderful.”

Heaven is told in the voice of a 14-year-old student who is subjected to a traumatic form of physical abuse and bullying from his peers at school, who refer to him as “Eyes” because of his lazy eye. Instead of resisting, the boy chooses to suffer in complete resignation.
“Whether they were kicking or punching or pushing me, Ninomiya and his friends were careful not to ever leave a mark. When I got home and saw I had no bruises, I always wondered where they could have learned this kind of trick.”
The only person who understands what he is going through is a female classmate who suffers similar treatment at the hands of her tormentors.
The two start corresponding with one another over secret notes passed back and forth before class, “I want to see you. Meet me after school. I’ll be there, from five to seven,” one note says. 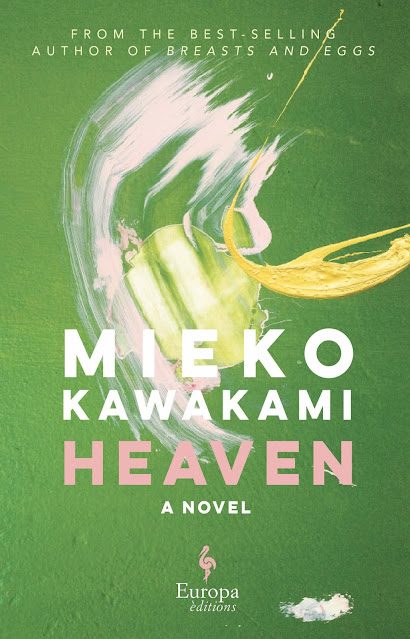 When the day to meet comes, the boy is so overwhelmed with anxiety, unsure whether it’s his tormentors writing him these notes, or if it’s truly someone seeking connection and companionship. “There was a date and a simple, hand drawn map. I could hear my heart throbbing in my ears. I read the note so many times that I could see the words before me, even when I closed my eyes.”
It turns out that the notes are from Kojima, a girl in his class, the only person who understands what he is going through since she suffers similar treatment at the hands of her own tormentors.
They eventually meet and continue their correspondence. There’s a beautiful innocence to the notes they exchange, in which they discuss finding their voices and what they think the future will bring. The bullying goes on as they continue passing each other notes, however they rarely mention it in their writing to one another, as though there’s no need since they already know what the other is being subjected to.
I found the correspondence between the two students to be a beautiful thing, them both coming to life with one another. In the face of bullies, one can often feel there is nothing worth living for, feeling dead behind the eyes, and adding a little spark of a character like Kojima really lightened this novel up for me. Despite having to face her own bullies, she seems to have a fire within her that keeps them both going.
“Kojima said bye and pretended to leave but kept poking her head out. I laughed every time. The last time, she gave me a big wave and disappeared.”
Mieko Kawakami captures a lot of the emotional trauma that can come along with being bullied. Her execution of this is impeccable. Heaven will transport you to some very dark places at times, but with characters like Kojima, the reader is able to find the light and guide themselves out again.
It was a beautifully written novel, and I believe, another stunning achievement for Kawakami to add to her translated works.
Mieko Kawakami is the author of the internationally best-selling novel, Breasts and Eggs, a New York Times Notable Book of the Year and one of TIME’s Best 10 Books of 2020. Born in Osaka, Kawakami made her literary debut as a poet in 2006, and published her first novella, My Ego, My Teeth, and the World, in 2007. She has received numerous prestigious literary awards in Japan, including the Akutagawa Prize, the Tanizaki Prize, and the Murasaki Shikibu Prize. Kawakami lives in Tokyo, Japan.

Heaven is available to purchase at Indigo and on Kobo. Check GoodReads for additional retailers.