“We cannot fully appreciate the light without the shadows. We have to be thrown off balance to find our footing. It’s better to jump than fall. And here I am.”

From the Academy Award–winning actor, an unconventional memoir filled with raucous stories, outlaw wisdom, and lessons learned the hard way about living with greater satisfaction.

Recently, I worked up the courage to sit down with those diaries. I found stories I experienced, lessons I learned and forgot, poems, prayers, prescriptions, beliefs about what matters, some great photographs, and a whole bunch of bumper stickers. I found a reliable theme, an approach to living that gave me more satisfaction, at the time, and still: If you know how, and when, to deal with life’s challenges - how to get relative with the inevitable - you can enjoy a state of success I call “catching greenlights.”

It’s a love letter. To life. 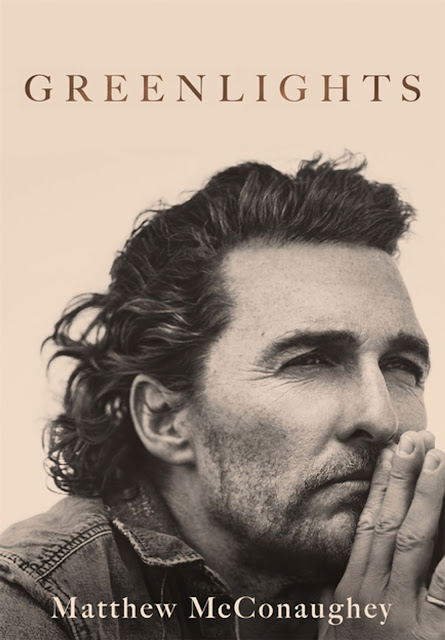 What I thought
Hands down one of the best books I've read this year. I don't say that often when it comes to the books I've read. A quick glance at my GoodReads account tells me that Greenlights is my 98th book of the year (it's June 1st) although this review likely won't appear for a couple of months. So I've had 97 books before this one to judge it by. I'm not surprised it's been on the New York Times bestseller list almost every week since its release.
I've had the book on my shelf for quite some time, having purchased it the day it came out, actually. It was just recently, on a night I couldn't sleep, that I gave myself the greenlight to go ahead and read it. I read the physical book, which I purchased at Indigo, along with the audiobook, purchased through Kobo.
My first thoughts, just moments into the audiobook were, can you win an Oscar for an audiobook? I mean, holy sh*t. I was blown away.
I found Matthew's story to be told with so much vulnerability, strength, courage, and honestly. The audiobook was a show in itself, with his full personality coming through, vibrant, glowing, and blaring through my AirPods. I knew the instant I started listening that I'd made the right decision getting the audiobook as well. No regrets.
Although the audiobook was enough to stand on its own, as was the book, with its photos and original scans of Matthew's journals, but having the two was incredible, and just enhanced the entire experience. If you can afford it, I absolutely recommend both.
The name of the book, he describes it at the beginning. The description of greenlights, and what they mean to him, they signify carrying on, continuing, proceeding. He thinks of them as “an affirmation of our way. They're approvals, support, praise, gifts, gas on our fire, attaboys, and appetites. We love greenlights,” he writes.
I've never quite read, or listened to anything like Greenlights before. I've read a lot of celebrity memoirs, but like Matthew says at the beginning, “this is not a traditional memoir. Yes I tell stories from the past, but I have no interest in nostalgia sentimentality, or the retirement most memoirs require.”
By the time I reached the end of the book, my highlighter was completely drained, but my energy was not. I felt alive, full of energy, and recharged. I was able to stay engaged and alert throughout the entirety of the Greenlights. The only downside? It wasn't long enough, I felt like I could have kept going.
This book will likely live on my shelf forever, and as for the audiobook, it's one I'll pull out on the darkest of days, when I need a greenlight reminding me that I must continue on.
Academy Award–winning actor and New York Times bestselling author Matthew McConaughey is a married man, a father of three children, and a loyal son and brother. He considers himself a storyteller by occupation, believes it’s okay to have a beer on the way to the temple, feels better with a day’s sweat on him, and is an aspiring orchestral conductor.
In 2009, Matthew and his wife, Camila, founded the just keep livin Foundation, which helps at-risk high school students make healthier mind, body, and spirit choices. In 2019, McConaughey became a professor of practice at the University of Texas at Austin, as well as Minister of Culture/M.O.C. for the University of Texas and the City of Austin. McConaughey is also brand ambassador for Lincoln Motor Company, an owner of the Major League Soccer club Austin FC, and co-creator of his favorite bourbon on the planet, Wild Turkey Longbranch.

Greenlights is available to purchase at Indigo and on Kobo. Check GoodReads for additional retailers.