Everything You Ever Wanted by Luiza Sauma Audiobook Review

“When I leave earth,” she thought, “I’ll never see a darkening sky again, but it was ok. How many sunsets does a person need to see, to carry on living?”

EVERYTHING YOU EVER WANTED

You wake up. You go to work. You don't go outside for twelve hours at a time. You have strategy meetings about how to use hashtags. After work, you order expensive drink after expensive drink until you are so blackout drunk you can't remember the circumstances which have led you to waking up in bed with your colleague. The next day you stay in bed until the afternoon, scrolling through your social media feeds and wondering why everyone else seems to be achieving so much.

Sometimes you don't get out of bed at all.

Then you hear about Life on Nyx, a program that allows 100 lucky winners the chance to escape it all, move to another planet and establish a new way of life. One with meaning and purpose. One without Instagram and online dating. There's one caveat: if you go, you can never come back.

But you aren't worried about that.

After all, what on Earth could there possibly be to miss? 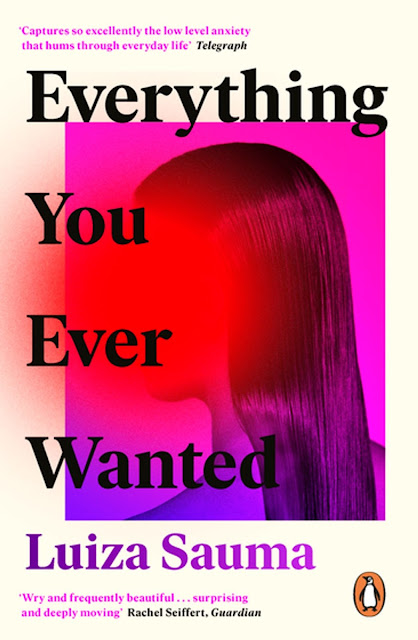 Review
I came across this book a few months back when I saw it as one of Florence Welsh’s Between Two Books book club picks. It’s been lurking on my GoodReads TBR list since then and I had tried hunting it down in various bookstores to no avail, so I was excited when I saw the audiobook listed on the Kobo store. The physical book can also be ordered at Indigo.
The audio is narrated by Stephanie Racine. I found her voice to be quite soothing and hypnotic. She had the power to send me off into a deep sleep but all the while holding my full attention while I clung to Luiza’s prose.
There’s a mysteriousness to her tone. Her short pauses after each paragraph which leave the reader longing for more. The pacing was quite slow initially, but after some playing around, I settled on a speed of 1.75-2x which was perfect.
“The planet is even more dazzling than it is on screen. Truly, you’ve never seen anything like it,” she narrates, displaying such passion and allure when talking about Nyx. I found myself thinking at the beginning “if only somewhere like Nyx existed.” She had me wrapped around her finger.
One narrator portraying so many characters can be difficult, but Stephanie did a stellar job here, and with the changes in her tone I was able to easily distinguish between the characters. She pulls off the British, American, and Australian accents with great accuracy.
There are moments when the protagonist, Iris, is anxious and panicking and Stephanie does a fantastic job of conveying these emotions with her shaky, nervous tone.
Everything You Ever Wanted took some getting into, but I’m so glad I stuck with it because it turned into a truly wonderful story. Science fiction isn’t a genre I usually read or review, but I really enjoyed this book.
To conclude, I absolutely recommend this one. Stephanie’s voice is captivating and Luiza’s prose addictive. The story has the power to break hearts, but is so incredibly beautiful.
About the author
Luiza Sauma was born in Rio de Janeiro and raised in London. Her first novel, Flesh and Bone and Water, received widespread critical acclaim, and she was listed by the Telegraph as one of their 'ones to watch' for 2017. Luiza worked at the Independent on Sunday for several years before becoming a novelist. She has an MA in Creative and Life Writing from Goldsmiths, University of London, where she won the Pat Kavanagh Award.
About the narrator
Stephanie Racine was born in Singapore to British/German parents, She has an undergraduate and Masters degree from the University of Warwick and is an acting graduate of the Bristol Old Vic Theatre School. She lives and works in London. Alongside her stage, screen and radio drama work, Stephanie is a Carleton Hobbs winner, has voiced a Sony Award-winning campaign for the BBC and was nominated for Best Crime Audiobook for the New York Times Bestselling Audiobook Sometimes I Lie, by Alice Feeney.

Everything You Ever Wanted is available to purchase at Indigo and on Kobo. Check Penguin Random House CA for additional retailers.