“It was the out-of-body power. Before I knew what was happening, I had left my body the way I had the day of the summer festival and was watching myself.”

Natsuki isn't like the other girls. She has a wand and a transformation mirror. She might be a witch, or an alien from another planet. Together with her cousin Yuu, Natsuki spends her summers in the wild mountains of Nagano, dreaming of other worlds. When a terrible sequence of events threatens to part the two children forever, they make a promise: survive, no matter what.
In the second half of the book, Natsuki is grown up. She lives a quiet life with her asexual husband, surviving as best she can by pretending to be normal. But the demands of Natsuki's family are increasing, her friends wonder why she's still not pregnant, and dark shadows from Natsuki's childhood are pursuing her. Fleeing the suburbs for the mountains of her childhood, Natsuki prepares herself with a reunion with Yuu. Will he still remember their promise? And will he help her keep it? 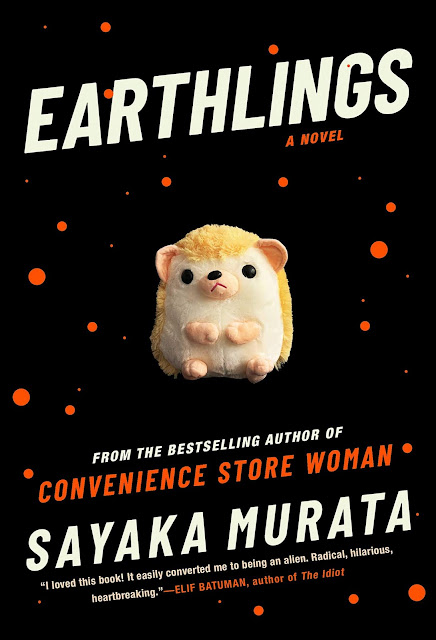 What I thought
I should preface this review by saying that Convenience Store Woman by Sayaka Murata is one of the best novels I have ever read. I have recommended it to almost everyone that I know. I absolutely adore that little book and will always have a copy on my bookshelf wherever I go.
When I heard that Sayaka Murata had another translated novel coming to market, I was jumping for joy with excitement, and pre-ordered it the second I could. I didn’t know what to expect, but one thing I knew for sure was that it was going to be hard to follow up her previous novel. Regardless, I was eager to read Earthlings!
Earthlings starts out with eleven-year-old Natsuki in the car, driving with her parents and sister to visit her Granny and Granda. They’re headed into the darkness, up and around bends, high up into the hills. Natsuki feels as though she’s gradually moving towards the sky.
She’s hugging her little backpack close, since inside are her origami magic wand and her magical transformation mirror, given to her, along with her magic powers, by her best friend, Piyyut. He can’t speak human since evil forces put a spell on him, but it seems that Natsuki doesn’t mind since he takes care of her, so she won’t get car sick. She met Piyyut five years ago at the supermarket by the station, and he’s been with her ever since. She uses the powers he gave her to protect the Earth, and ensure everyone lives in peace.
At this point, the novel reads like a beautiful children’s novel. All happiness, joy, daisies, and roses. Chapter one continues in this same prose, pulling the reader in, keeping them with a smile on their face while doing so.
Things take a turn after chapter one, and from there, Earthlings turns into an absolutely gut-wrenching story.
It’s probably the most bizarre books I’ve ever read in my entire life. One thing I really like about Sayaka Murata is that she conforms to no one. She beats to the sound of her own drum. Her creativity is so unique, and her stories are unlike anything else out there. They are so utterly wild and outrageous.
Earthlings received very mixed reviews, and I can understand why.
"Little by little we stopped talking and we’re just breathing. We were both swimming in each other’s bodies. The insects chirred and the grass swayed in time with our breathing."
The prose was disturbing and shocking, but also innocent in a way, and deeply thought-provoking. I found myself forgetting at times the age of Natsuki, just eleven years old. Even when Natsuki is an adult, I feel as though she’s still mentally a child, “frozen in time,” as Yuu says.
Some of the storylines in this book were extremely difficult to digest. There were very disturbing themes.
I found myself reaching for Convenience Store Woman as Earthlings drew to a close, craving the comforts of Smile Mart, where I knew I would be content, and in a safer place. I recommend some light reading material after this novel.
Sayaka Murata is the author of many books, including Convenience Store Woman. She's also the winner of Japan’s most prestigious literary award, the Akutagawa Prize. Murata has been named a Freeman’s “Future of New Writing” author, and her work has appeared in Granta and elsewhere. In 2016, Vogue Japan selected her as a Woman of the Year.
Ginny Tapley Takemori lives in rural Japan and has translated fiction by more than a dozen early modern and contemporary Japanese writers. Her translation of Sayaka Murata’s Akutagawa prize-winning novel Convenience Store Woman was one of the New Yorker’s best books of 2018 and Foyle’s Book of the Year 2018.

Earthlings is available to buy at Indigo and on Kobo. Check GoodReads for a selection of other retailers.