All the Bright Places by Jennifer Niven

“I’m still here, and I’m grateful, because otherwise I would be missing this. Sometimes it’s good to be awake.” — Finch

ALL THE BRIGHT PLACES

Theodore Finch is fascinated by death, and he constantly thinks of ways he might kill himself. But each time, something good, no matter how small, stops him.
Violet Markey lives for the future, counting the days until graduation, when she can escape her Indiana town and her aching grief in the wake of her sister’s recent death. 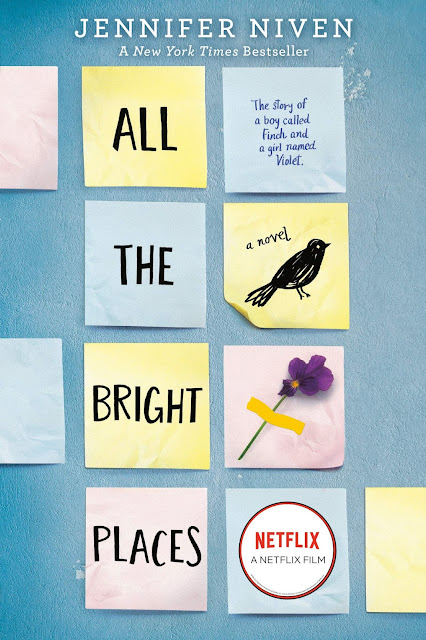 The opening to Jennifer Niven’s All The Bright Things, when we meet the main protagonist, seventeen-year-old Theodore Finch, known simply as Finch. The reader meets him on the school’s bell tower, standing on a ledge just four inches wide. As if disassociating, he knocks one of his legs against it sometimes to remind himself that it’s there.
‘I could just step off. It would be over in seconds. No more “Theodore Freak.” No more hurt. No more anything,’ he thinks. For a moment, Finch can feel the the false sense of appeal to ending his life, the sense of peace as his mind goes quiet, as if he’s already dead, weightless, and free.
And then he sees her, Violet, at the other side of the ledge.
The way in which Jennifer describes the first time Finch she’s Violet is beautiful. ‘Up close like this, I can see that her skin is smooth and clear except for two freckles on her right cheek, and her eyes are a gray-green that makes me think of fall. It’s the eyes that get me. They are large and arresting, as if she sees everything. As warm as they are, they are busy, no bullshit eyes, the kind that look right into you, which I can tell even through the glasses.’
After discovering each other, Finch and Violet make more important discoveries: It’s only with Violet that Finch can be himself—a weird, funny, live-out-loud guy who’s not such a freak after all. And it’s only with Finch that Violet can forget to count away the days and start living them. But as Violet’s world grows, Finch’s begins to shrink.
Jennifer Niven has created a compelling storyline, one that caught me, held me tightly and wouldn’t let me go. All The Bright Places explores themes of mental health, stigma, and suicide. It’s clear early on, from the blurb alone, that both Violet and Finch are struggling with their mental health. They both find themselves at the top of the school’s bell tower contemplating ending their lives.
Niven seemed to have a good understanding of mental health and was able to portray the complexities of it in an accurate way.
I should mention that as well as reading the physical book, I also listened to the audiobook, narrated by Kirby Heyborne, Ariadne Meyers, and the author, Jennifer Niven, which had a nice flow to it.
The voice of Finch seemed to fit very well with his character as I perceived him according to Niven's prose. He even had me laughing many times. I found the voice of Violent to be a little off putting, and not at all fitting to the character. At times, I felt as though I was listening to a middle-aged woman and not a high school girl, so that’s the only downside in regard to the audiobook. 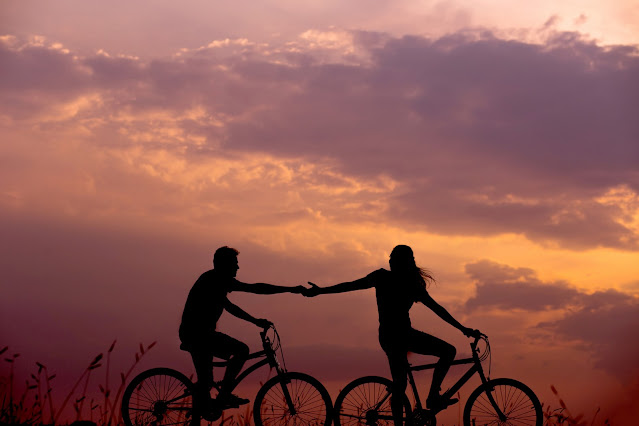 The voices were distinct enough to differentiate between all the different characters, as well, and listening to the narration did enhance the reading experience. The audio also lightened up a story with so much darkness to it.
I found myself switching between the audiobook and physical copy, which was great for a book like this since I had a lot to do the day I read it, but I really didn’t want to put it down. Thankfully, I could just plug in my AirPods and take the story of Violet and Finch with me while I went about my errands.
Finally, Niven leaves the reader with a chilling message at the end. A reminder that every forty seconds, someone in the world dies by suicide. Every forty seconds, someone is left behind to cope with the loss. It was a tragic way to end this book.
She leaves us with important words:
If you think something is wrong, speak up.
You are not alone.
It is not your fault.
Help is out there.
The Canada Suicide Prevention Service is available to help 24/7/365. Call: 833-456-4566
Visit this link for more services and information.
Niven includes contact information for US mental health service providers in her book, but since the majority of my readers are in Canada I wanted to include the Canadian services above.
Jennifer Niven is the New York Times bestselling author of All the Bright Places and Holding Up the Universe, as well as the popular Velva Jean series. She is also the author of several non-fiction books, including Ada Blackjack, The Aqua-Net Diaries, and The Ice Master, which was named a top non-fiction book by Entertainment Weekly. Her New York Times bestseller All the Bright Places is soon to be a major motion picture starring Elle Fanning. Although she grew up in Indiana, she now lives with her fiancé and literary cats in Los Angeles, which remains her favorite place to wander.

All the Bright Places is available for purchase at Indigo and on Kobo. Check GoodReads for additional retailers.