They Both Die at the End by Adam Silvera

“On behalf of Death-Cast, we are sorry to lose you. Live this day to the fullest.”

THEY BOTH DIE AT THE END

Adam Silvera reminds us that there’s no life without death and no love without loss in this devastating yet uplifting story about two people whose lives change over the course of one unforgettable day.
On September 5, a little after midnight, Death-Cast calls Mateo Torrez and Rufus Emeterio to give them some bad news: They’re going to die today.
Mateo and Rufus are total strangers, but, for different reasons, they’re both looking to make a new friend on their End Day. The good news: There’s an app for that. It’s called the Last Friend, and through it, Rufus and Mateo are about to meet up for one last great adventure—to live a lifetime in a single day. 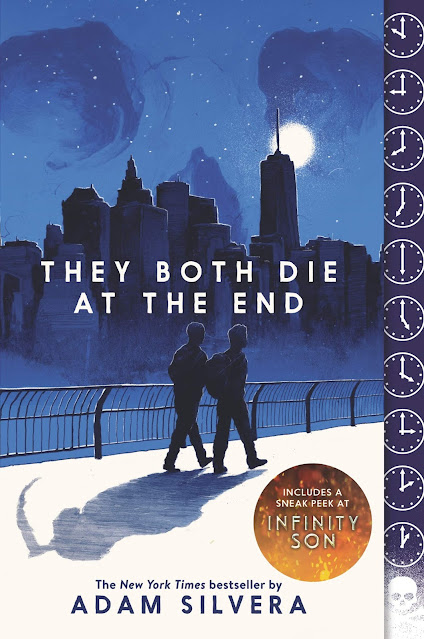 Review
They Both Die at the End was deeply thought-provoking, with themes of life, meaning, social connections, and the choices we make. There was the obvious message of living life to the fullest, but I think there was also a lot of reading between the lines with this novel, with themes of grief and denial, especially from the cameo characters who would appear throughout.
Matteo says at one point, “Too bad life doesn’t allow us to turn its gears, like a clock.”
A reality that I think a lot of us humans face. I think if faced with this choice, I would turn the clock back to spend time with loved ones who have since passed. Would I redo the things that I’ve done wrong? I don’t think so. There’s a beauty in mistakes. And would I inch the time forward, I doubt it.
I found the plot to be completely original, engaging, and memorable. I started thinking what would happen if I, myself, received a call from Death-Cast. I just know I’d want to spend the day surrounded by my loved ones, doing the things I love the most, and trying to be as present as possible. It’s hard to say though.
When asked by Bookpage what his inspiration for this novel was, author Adam Silvera said:
“They Both Die at the End was inspired by this panicking anxiety of not knowing when we’re going to die, and wondering how differently our final day would look if we know when that day was.”
Regarding the audiobook, it had a nice flow to it. The voices of Rufus and Matteo seemed to fit well with the characters I imagined them to be.

Adam Silvera is the #1 New York Times bestselling author of Infinity Reaper, Infinity Son, They Both Die at the End, More Happy Than Not, History Is All You Left Me, and What If It's Us with Becky Albertalli. All his novels have received multiple starred reviews. He worked in the publishing industry as a children's bookseller, community manager at a content development company, and book reviewer of children's and young adult novels. He was born and raised in New York. He lives in Los Angeles and is tall for no reason.

They Both Die at the End is available at Indigo and on Kobo. Check Harper Collins Canada for additional retailers.