The Very Nice Box By Eve Gleichman and Laura Blackett

"She didn't want to give him the satisfaction of looking over her shoulder, but she couldn't help but imagine what he would look like if she did. He would be standing there rubbing the back of his head. He would be criminally charming. His cheeks would be rosy. His hair would be perfectly dishevelled. She pulled Brutus ahead, electrified by anger, and ordered herself a Sfyft."

For fans of Eleanor Oliphant Is Completely Fine and Severance: an offbeat, wryly funny debut novel that follows an eccentric product engineer who works for a hip furniture company where sweeping corporate change lands her under the purview of a startlingly charismatic boss who seems determined to get close to her at all costs…

Ava Simon designs storage boxes for STÄDA, a slick Brooklyn-based furniture company. She’s hard-working, obsessive, and heartbroken from a tragedy that killed her girlfriend and upended her life. It’s been years since she’s let anyone in.

I was so thrilled about this book. Eleanor Oliphant is Completely Fine is one of my favourite books of all time, so the fact that this one has been compared to it got the adrenaline pumping for me, and I couldn’t wait to start reading it. I love a good romantic fiction novel, especially one that focuses first on themes of isolation and loneliness, and then leads to a transformation of self-discovery with the main character.
The Rosie Project was another one that just stole my heart right out of my chest. These stories are so filled with love, compassion, kindness, and friendship. They’re an absolute pleasure to read, and I was hoping the same to be true of The Very Nice Box, which like the others I’ve mentioned, promised a sprinkling of humour, too.
I had trouble sleeping one night recently, and was ecstatic to wake up to an email from NetGalley containing this e-book for review a few weeks before its release. The chances of me getting back to sleep were pretty slim anyway, but after seeing that email, there was no chance!

We find out a lot about the novel’s protagonist and narrator, Ava Simon, pretty early on. She’s a functional gal, a fan of well-designed household items, free of unnecessary decorations and features. A minimalist, if you will, owning two simple dinner plates, two water glasses, two mugs, two forks, spoons, and knives. She’s quite like myself before my boyfriend moved in with me. I actually think I was living off the plastic cutlery leftover from takeout food, and whatever miscellaneous office cutlery accidentally found its way into my tote bag after a day at work.
Ava lives her day by ‘units’, each one divided efficiently into 30 minute increments. Already, at this point, I feel like I’m deeply invested in her story.
Not only is she highly productive, but she’s practical, too, with just seven long sleeved shirts, two pairs of sneakers, seven pairs of black socks, and seven pairs of black underwear. She’s got one lightweight jacket, one winter coat, and one rain jacket.
The protagonist and narrator is an intelligent girl, too, ‘an engineer for STÄDA’s Storage team’ taking care and satisfaction in her work in their sixteen units. She spends her day surrounded by their furnishings, which are made up of wood, metal, MDF, plastic, linen, and pulp board. Then she returns home, to the same kind of minimalist style of product that she designs for a living. 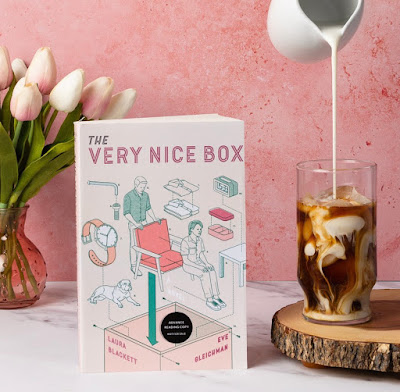 I resonated a lot with Ava at the beginning, her with her creature comforts, which is one of the reasons I adored this book so much. I just have this image of her in my mind, working at a place similar to IKEA, a company with a mission statement ‘simple furniture for your complicated life.’
Since she’s an engineer, her job as a product designer is to study and develop products that people want to use daily. They can work in any organization the products are created, in this case, STÄDA, a place of supposed unconscious bias and radical compassion. Ava’s job would be to make a product that consumers want to use.
She’s spent the past ten years working tirelessly at STÄDA to design the Singular Shoe Box, the Genuine Storage Box, the Delightful Storage Box, the Purposeful Loose Ends Box, the Sensible Bento Box, and the Memorable Archives Box.
However, our narrator has a new Passion Project up her sleeve: the very nice box, a simple but smart design that she hopes will be introduced to the world this year. This one is different from all the others. Simple, but very different. ‘It’s the very reason she’s still here, to create a product like this: meticulous, without frills or gimmicks, just the ideal intersection of geometry and utility.’
The more I read, the more connected I feel to Ava, and I find myself dreaming up all sorts of possibilities for her, and her very nice box. However, just as she gets down to work, she notices a new employee coming towards her. He reaches out to shake her hand. ‘He clearly had not yet learned the unofficial STÄDA greeting, which was simply a hand raised, shoulder-length, as though an oath were being taken.’ A greeting to prevent touch.
The new employee, Mat, was hoping to chat with Ava, and all she could think about was, what could he possibly have to tell me? And how many units would this take?
Who is this Mat Putnam? Who does he think he is, and what is he doing at STÄDA? 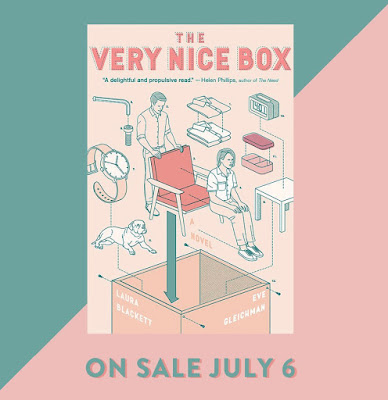 There were certain things in the first chapter that caught my eye and told me that this wasn’t going to be the typical romantic fiction novel I was expecting, which intrigued me, and just drew me in further. I found it refreshing.
Well written, engaging, and an interesting and original read. I found myself falling for the lovely Ava Simon right away. The similarities between herself and I, were, at times uncanny.
I ended up spending the majority of my day off engrossed in her life, and her very nice box. I also found myself wondering what it would be like to work at a place like STÄDA, this Silicon Valley-esque furniture startup
All in, this was amusing, charming, and at times, quite thrilling. It was also thought-provoking, and excellently well-thought-out.
The Very Nice Box didn’t disappoint, this one got my seal of approval right from the get go. The only downside I have to share is that I found the book a bit too long, at almost 400 pages. Since it was so long, I found myself getting a bit lost and distracted at certain points. So I feel as though it could have been edited down. Aside from that though, it was great.
While it didn’t hold me captive like Eleanor or The Rosie Project, there were similar elements, so I did appreciate that.
Eve Gleichman is a writer whose short stories have appeared in the Kenyon Review, the Harvard Review, BOMB Daily, and elsewhere. Eve is a graduate of Brooklyn College's Fiction MFA Program and lives in Brooklyn.
Laura Blackett is a woodworker and writer based in Brooklyn.

The Very Nice Box is available for pre-order, releasing July 6th at Indigo and on Kobo. Check GoodReads for a list of other retailers.

Thank you to HMH Books and Net Galley for the advanced reader copy of The Very Nice Box. It was very nice of you!