The Passenger by Chaney Kwak

‘There's a travel industry adage that cruises are for “the over feds, the newly weds, and the nearly deads.” I certainly fit into the first category now; it seemed I was about to qualify for the last’

In March 2019, the Viking Sky cruise ship was struck by a bomb cyclone in the North Atlantic. Rocked by 50-foot swells and 40-knot gales, the ship lost power and began to drift straight toward the notoriously dangerous Hustadvika coast in Norway. This is the suspenseful, harrowing, funny, touching story by one passenger who contemplated death aboard that ship.

Chaney Kwak is a travel writer used to all sorts of mishaps on the road, but this is a first even for him: trapped on the battered cruise ship, he stuffs his passport into his underwear just in case his body has to be identified. As the massive cruise ship sways in surging waves, Kwak holds on and watches news of the impending disaster unfold on Twitter, where the cruise ship’s nearly 1,400 passengers are showered with “thoughts and prayers.” Kwak uses his twenty-seven hours aboard the teetering ship to examine his family history, maritime tragedies, and the failing relationship back on shore with a man he’s loved for nearly two decades: the Viking Sky, he realizes, may not be the only sinking ship he needs to escape.

The Passenger takes readers on an unforgettable journey from the Norwegian coast to the South China Sea, from post-WWII Korea to pandemic-struck San Francisco. Kwak weaves his personal experience into events spanning decades and continents to explore the serendipity and the relationships that move us―perfect for readers who love to discover world travel through the eyes of a perceptive and witty observer. 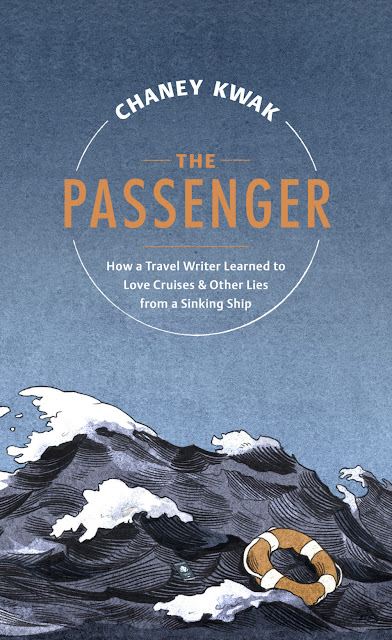 I’m used to seeing Chaney Kwak’s name on the byline of some of my favourite travel magazines. Scrolling through the New York Times, you’ll see his name attached to articles with headlines like 36 Hours in Athens and 36 Hours in Singapore. He also authored the Wallpaper* San Francisco guide, the same one that’s staring at me from my bookshelf right now. The very book I mulled over for days before finding out that COVID-19 had slashed my Bay Area travel plans last year.

Reading his travel features will have your body flooding with jealousy, and a desire to join him on one of his exotic trips.

However, reading Chaney’s new and exhilarating debut memoir, The Passenger, I decided I no longer wanted to join him. At least not on a cruise, anyway. He sounds wonderful otherwise, with his witty and sarcastic sense of humour.

I was captivated by this little book, both by its description and the author, knowing I’d be in for a wild and adventurous ride from the description, and that it would be both well-written and memorable, much like Kwak’s travel writing.

The book takes form in diary style, with time stamps that take the reader on a realistic journey through the events that happened aboard the Viking Sky in March 2019, allowing the reader the opportunity to put together more of a visual picture in their minds, albeit a terrifying one.

‘As the cruise ship almost tips over, the horizon that once bisected my lovely balcony door rises like a theater curtain and disappears,’ the book begins, immediately immersing the reader in Kwak’s experience.

I thought to myself at this point how this is something we only ever experience in TV shows, movies, and works of fiction, does it actually happen?

It’s clear from The Passenger, that it does indeed, actually happen. Surges of panic and anxiety are felt throughout, but are soothed by the casualness to which Kwak approaches his writing, which takes the edge off.

I really enjoyed this about the book, that despite describing events, in vivid detail, that could have taken his life in a heartbeat, Kwak keeps that same dry sense of humour which takes away any heaviness this memoir could have possessed, and instead makes it a more vibrant and adventurous read.

When passengers are being airlifted off the ship, Chaney had me in fits of laughter, ‘A woman, not old enough to collect Social Security, luxuriates on her back, grinning and reaches out her arms to take a selfie as eight panting crew members carry her like she’s a beefy Queen of Sheba.’ It’s one of many times I find myself laughing in the book. Though the events themselves are by no means funny, Kwak’s approach to describing them most definitely are.

As well as relaying the events of his near-death experience, Chaney was also quite vulnerable in this memoir, touching on personal relationships with a partner and his family. I found that only added more depth and without it, the book might have been lacking.

While it might seem, from his travel writing that Kwak lives a life of luxury, he does so alone. When describing a cruise ship, he refers to it as a city, ‘and like any other city, it can be a very lonely place…’

This got me thinking about Chaney, wandering the endless hallways on that ship, awaiting the spectacular Northern Lights, which he would observe alone, and then write about, alone. I felt sad for him at that moment, to experience such a thing of beauty and share it with the world, but doing so alone. It felt isolating, and suddenly I felt okay with the idea of being right where I was, at home, surrounded by my partner, cat, and dog.

All in all, this made for a great evening read. I felt as though I had the opportunity to indulge in Chaney Kwak’s writing for longer than usual, even though the book is short at just 160 pages, it’s much longer than his regular features.

It was fascinating in many ways to learn about the workings of a cruise ship (not in a boring way, though), and how Kwak dealt with the obstacles that were thrown at him, both on the ship, and off. I loved his sense of humour most of all, it kept me afloat, and I sailed through the book smoothly from start to finish.

I found myself wondering at the end, where would one file this in a bookstore, travel, or humour? To me, it was both.

To you, it might be more. I know you’ll love it!

Chaney Kwak has written for publications such as The New York Times, Condé Nast Traveler, Food & Wine, Travel & Leisure, and a number of National Geographic anthologies. His fiction has appeared in Zyzzyva, Catamaran Literary Review, Gertrude, and other literary journals, earning a special mention from the Pushcart Prize. A winner of the Key West Literary Seminar Emerging Writer Awards, Kwak has received scholarships from the Bread Loaf Writers’ Conference and was a Friends of the San Francisco Public Library Brown Handler Resident. He teaches nonfiction writing at the Stanford Continuing Studies program.

The Passenger is available to pre-order at Indigo and on Kobo (for release on June 8th). Check GoodReads for additional retailers.