The Other Black Girl by Zakiya Dalila Harris

"Now, Nella was no fool. She understood that characters of color were en vogue, as was maintaining vigilance when it came to calling out anything that lacked proper representation."

THE OTHER BLACK GIRL

Twenty-six-year-old editorial assistant Nella Rogers is tired of being the only Black employee at Wagner Books. Fed up with the isolation and microaggressions, she’s thrilled when Harlem-born and bred Hazel starts working in the cubicle beside hers. They’ve only just started comparing natural hair care regimens, though, when a string of uncomfortable events elevates Hazel to Office Darling, and Nella is left in the dust.

Then the notes begin to appear on Nella’s desk: LEAVE WAGNER. NOW.

It’s hard to believe Hazel is behind these hostile messages. But as Nella starts to spiral and obsess over the sinister forces at play, she soon realizes that there’s a lot more at stake than just her career.

A whip-smart and dynamic thriller and sly social commentary that is perfect for anyone who has ever felt manipulated, threatened, or overlooked in the workplace, The Other Black Girl will keep you on the edge of your seat until the very last twist. 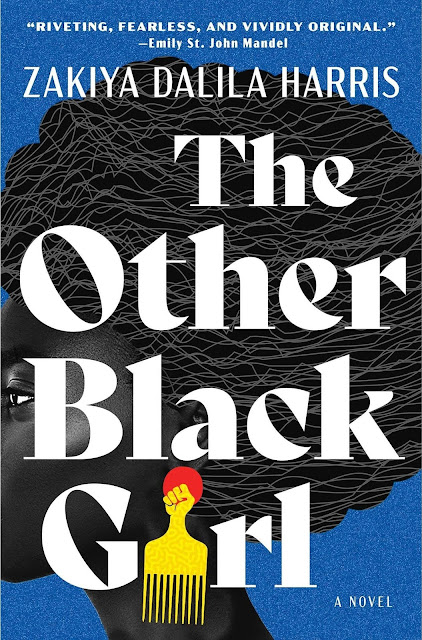 I was sold the second I read the plot for this one. Described as Get Out meets The Devil Wears Prada, two movies I adore, I just had to read The Other Black Girl. I wanted the full experience of this one, so I read the book and indulged myself with the audiobook as well.
It’s December 1983, and the book opens at Grand Central Terminal in Midtown Manhattan, where immediately it feels like the protagonist is on the run from someone. Mystery is already in the air within those first few moments of the audiobook, the panic in the narrator’s voice not giving away too much. But she’s pulling us in, seductive in her tone.
The prose, ‘Did anyone see me get into the cab? What the hell am I doing? What the hell are they doing?’
The Other Black Girl has the power to draw the reader in immediately, has them addicted within just a few words, a few pages, leaving them with a desire to know more, to read on. The narrator’s tone in the prologue fits well with Zakiya’s alluring and mysterious prose.
We then meet Nella Rogers. The year is 2018, and she’s working at Wagner Books. The cool whispers of her voice are narrated by Aja Naomi King. Immediately the reader knows she’s a singled out Black girl working in a white woman’s world.
‘She couldn’t remember who’d said it to her first, or if it had ever been said directly to her at all, but that didn’t stop her from telling herself over and over again that her brown skin meant she needed to be twice as good as the girl with the white skin…’
Nella has worked hard to prove herself at Wagner for the two years she’s been there. She had recently asked for a promotion, to which her boss, Vera, replied, “I wish you’d put half the effort you put into those extracurricular diversity meetings into working on core requirements.”
And by extracurricular, she means Nella’s campaigning for more diversity on the Wagner team, one which Vera clearly does not share the same enthusiasm on.
A chilling sign of the times, I’m thinking by this point.
Nella decides to put the promotion issue to rest for now, and focus on something else that’s consuming her senses: the scent of cacao butter in the air. She could tell, there was another Black girl on her floor. And this girl, was here for an interview.
She befriends the new girl, Hazel, with the two hitting it off immediately. They bond over Literary Black Queens, and the fact they’re the only two Black girls working in an all white world.
The book takes a bit of a dip here, and just as I feel a lull pending, Nella receives a note, LEAVE WAGNER. NOW.
From here, the plot picks up and Harris takes us on a thrilling ride, with one twist following another and lots of reading between the lines, until the reader is so utterly entangled within the web of the story itself.
Zakiya masterfully sets the character landscapes, her prose extremely vivid and filled with wonderfully detailed observations. I felt at times I could picture the Wagner offices, visualizing Nella’s surroundings.
The audiobook really enhanced the reading experience. The all star lineup, Aja Naomi King, Joniece Abbott-Pratt, Heather Alicia Simms and Bahni Turpin, each one bringing their own spin to Zakiya’s characters. Truly phenomenal. Definitely recommend the audio for this one. The voice of Vera was really fitting. The pacing of the audiobook worked well, too.
The Other Black Girl lived up to the hype for me, and was well worth the read, and listen. The audiobook really was the cherry on top, and I recommend it if you can afford it. If you have any doubts a few chapters into it, stick with it, because I guarantee that if you do, it’ll get to the point of no return, and just when Nella is being told to leave Wagner, you’ll decide you don’t want to leave your book!
Zakiya Dalila Harris received an MFA in creative writing from The New School. Her work has appeared in Guernica and The Rumpus. The Other Black Girl, from Atria Books, is her debut novel. She lives in Brooklyn.

The Other Black Girl is available to purchase at Indigo and on Kobo. Check GoodReads for additional retailers.

The physical book was provided to me by Atria books in exchange for a review and I purchased the audiobook through Kobo.