The Beauty in Breaking by Michele Harper

“So many things that happen to us that are not right, are not okay. And we can survive and heal and use that to be stronger and shape our lives and the lives of others in wonderful, powerful, healing ways, should we choose to do so. Honestly, that’s the reason to forgive.”
THE BEAUTY IN BREAKING

An emergency room physician explores how a life of service to others taught her how to heal herself.

Michele Harper is a female, African American emergency room physician in a profession that is overwhelmingly male and white. Brought up in Washington, DC, in an abusive family, she went to Harvard, where she met her husband. They stayed together through medical school until two months before she was scheduled to join the staff of a hospital in central Philadelphia, when he told her he couldn't move with her. Her marriage at an end, Harper began her new life in a new city, in a new job, as a newly single woman.

In the ensuing years, as Harper learned to become an effective ER physician, bringing insight and empathy to every patient encounter, she came to understand that each of us is broken—physically, emotionally, psychically. How we recognize those breaks, how we try to mend them, and where we go from there are all crucial parts of the healing process. 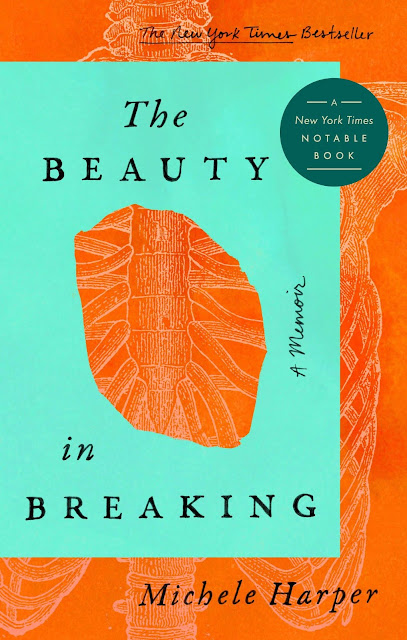 The book opens on Michele’s tumultuous childhood, where she didn’t often feel safe under the hand of her father. The abuse got so bad at one point that little Michele called emergency services, who showed up, and left shortly after, 'They had not asked me and my sister if we were safe. Without so much as a verbal censure to my father, they had simply abandoned a woman and her children to a clear danger in their house.' She continues, 'We never spoke of the 911 call — no one ever mentioned it — and I never dialed those three numbers again.'
It broke my heart to read this. With Michele, seven-years-old, just a little girl, working up the courage to ask for help, only to be turned away.
It was a visit to the ER with her family that led her to medical school, ‘I figured that if I could find stillness in this chaos, if I could find love beyond this violence, if I could heal these layers of wounds, then I would be the doctor in my own emergency room. That would be my offering to the world, to myself.’
Graduating from medical school brought with it its own challenges, especially when Michele’s father, who had left the family years earlier, showed up at her ceremony, ‘As we posed for family photos, a tension in me snapped. Each camera flash documented that the charade my family had always been was now publicly foisted onto this next stage of my life, where it was neither welcome nor tolerable.’
Following Michele’s graduation, she faced the gruelling theory and practical challenges of being a doctor. But she did what she had always done, and pushed through with strength, courage, and tenacity. Passing also meant that Michele could slip on that white coat that so many other doctors wore, ‘a uniform that signified expertise, authority, confidence’ but she’s quick to say that she found it cumbersome to wear as it was ‘just another item I had to protect from ‘blood, vomit, and bedbugs.’
I had arrived to an emergency room for medical stabilization prior to receiving inpatient treatment for an eating disorder. It was there that I had the opportunity to observe the work of the doctors and nurses within that department, pacing so fast that if they picked up their speed by just a little, it would turn into a sprint. It was clear to me by then, just how much, and how hard, they were working.
We often wonder what takes treatment teams at hospitals so long to get certain things done. However, it was there, in that emergency room, and in the medical stabilization unit afterwards, that I saw first hand, what takes so long, especially in the face of COVID-19, where these front line workers float so attentively among patients, caring for them like guardian angels, going above and beyond anything imaginable.
“Code white, code white, code white”
“Code blue, code blue, code blue”
“Code pink, code pink, code pink”
On the eating disorder inpatient unit, we would hear codes all the time. It was the last one, code pink, that would make our hearts drop to our stomachs. Code pink is a pediatric emergency. Code white, which was the most common, was for aggressive patients, code blue for cardiac arrest, and then there was code pink, which typically called for several moments of silence while we all hoped and prayed that whatever was happening within the walls of that hospital, that a life was being saved.
Michele talks about a pediatric emergency in The Beauty of Breaking. It reminded me that this is another thing we don’t see doctors doing, when they are faced with trauma and must deal with it immediately, with no time to process it: “time of death, one forty-one a.m.” she said as she pronounced a newborn baby, just twelve days old, dead. She then had to inform the family. Telling the mother, Michele documents, `She had already known, but the words were irrevocable confirmation,’ she continues, 'There was no space between the mother’s cries for me to say anything, no space for words.’
Raw, vulnerable, and courageous, The Beauty in Breaking was an awe-inspiring and beautifully written memoir. Through Michele’s story, I was able to gather that how ambitious and accomplished she is, but also how much she cares for her patients, touching each one so very deeply.
Harper tells her story like a poem, the prose lyrical and fluid. She was able to capture the essence of what being an ER physician entails with such beauty, while keeping me engaged from start to finish. I wasn’t able to put this book down, reading it entirely in one sitting.
I also listened to the audiobook, following along with the physical copy. I found the audiobook to have a nice flow to it, and believe the narrator, Nicole Lewis, was a great fit for what I imagine Michele to sound like.
I’ve never felt quite so moved by a book before reading The Beauty in Breaking. Once finishing, it left me with long-lasting thoughts to digest and changed my perceptions of the physicians who run our emergency departments, especially right now in the face of COVID-19.
All in, this memoir is absolutely stunning.
Michele Harper has worked as an emergency room physician for more than a decade at various institutions, including as chief resident at Lincoln Hospital in the South Bronx and in the emergency department at the Veterans Affairs Medical Center in Philadelphia. She is a graduate of Harvard University and the Renaissance School of Medicine at Stony Brook University. The Beauty in Breaking is her first book.

The Beauty in Breaking is available at Indigo and on Kobo. Check GoodReads for additional retailers.