The Craziest Pageant in History and the Rest of My Life

“I cannot explain the confidence that possessed me on the evening of November 20, 1970, but I was definitely feeling it.’
MISS WORLD 1970

Jennifer Hosten went to the 1970 Miss World pageant on a lark, representing the tiny Caribbean island of Grenada, and came home with the crown and a place in history. What was supposed to be a light-hearted affair, with a parade of the world's most beautiful women vying for the attention of the judges and comedian/host Bob Hope, turned out to be the most controversial, politically-charged, and consequential pageant ever.

Women's liberation activists blew up a BBC broadcast truck and stormed London's Royal Albert Hall in an attempt to sabotage the show, which they deemed a "cattle market." They threw rotten vegetables in the auditorium and hit Bob Hope with a flour bomb. When order was restored, Jennifer Hosten made history as the first women of colour to win the title.

The broadcast introduced its massive audience to both a militant new brand of feminism and a new ideal of beauty, one in which the whole world could share. Ms. Hosten followed her triumph with a successful career as a diplomat and public servant in Grenada and Canada. 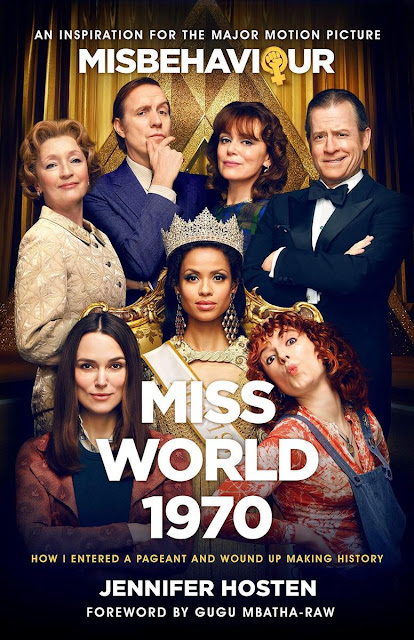 Jennifer Hosten’s engaging new memoir, Miss World 1970: The Craziest Pageant in History and the Rest of my Life, opens on a foreword by Gugu Mbatha-Raw, who plays Jennifer in Misbehavior, a 2020 movie based on her life.
Gugu writes the foreword at the dawn of 2020, when for the first time in history, Miss World, Miss Universe, Miss USA, Miss Teen USA, and Miss America, were all women of colour.
I found myself completely enthralled by Jennifer’s story. It seemed as though she’s lived nine lives, each of them so entirely different from one another. Her ability to take risks and just go for it is really inspiring. One minute she’s working at the BBC in London, then the CBC in Montreal, the next she’s an au pair in France, then she accepting a position as a flight attendant, despite her father’s disapproval.
She also took some additional time to enrol at the Denson Secretarial College at Queen’s Gate, "I wanted to be as well-rounded and qualified as possible to work in news and broadcasting, which meant learning shorthand and improving my typing skills and so on."
She meets various people along the way who make recommendations to her, and she bites the bullet right away, takes the bull by the horns and just goes for it.
I can really appreciate that kind of hunger because it’s exactly the way I am when it comes to doing things too. I loved reading about her various worldly experiences. Hosten seemed to carve her own path in life, regardless of what others thought of her and I have a lot of respect for her.
While working as a flight attendant, one thing led to another, that eventually led to her being crowned Miss Grenada, which then took her to the stage at Miss World 1970.
Hosten shows tenacity, strength, grace and courage, like a true beauty queen, throughout the entire book. A well written account of her time at Miss World 1970, this book manages to capture well the essence of pageant lifestyle, especially that leading up to one of the world’s most regarded events.
Miss World 1970 will catapult you backstage to a dressing room full of pre-competition anxiety and stress, and you’ll have the opportunity to experience the building frustrations and bitterness of the other contestants.
The media, as you can imagine, had a huge influence on the pageant, with reporters often putting contestants on the spot with tricky questions, especially on such issues as race and women’s liberation. Jennifer says in the book,
"The early 1970s were the height of the anti-Apartheid movement, a protest against enforced segregation and the unspeakably cruel racist policies of the South African government, and the ensuing controversy had caught up with the pageant. Reporters were asking why South Africa was entering only one white contestant in Miss World. Mecca had tried to address the issue by arranging two contestants from South Africa. One, white was called Miss South Africa. The other, Pearl Jansen, was black and called Miss Africa South."
Most of the contestants were careful and gave evasive answers to difficult questions from reporters. Some questioned whether Eric Morley, the Miss World Founder, was exploiting them.
‘I had the strangest feeling in my stomach when I heard the announcement: “And Miss World 1970 is Miss Grenada!” I was stunned, and, for the first time that evening, unprepared.’
I found the book to be quite an adventure, both engaging, and fascinating. It was, at times though, a sad reminder of the racism that is still so alive and rampant within our world, despite how far we've come since 1970.
The movie, Misbehaviour, was also fantastic, and I recommend watching that after reading the book. It stars Gugu Mbatha-Raw, Kiera Knightley, Jessie Buckley, and Greg Kinnear. I absolutely adored Gugu portraying the part of Jennifer, I think she did a fabulous job in the role.
A native of Grenada, Jennifer Hosten trained with the BBC and worked as a broadcaster and airline hostess before winning the 1970 Miss World competition. After, she enjoyed a career in diplomacy, trade negotiation, and international development. She also founded and ran a successful inn in Grenada, and now practices as a registered psychotherapist. A mother of two children, she lives in Oakville, Ontario.

Miss World 1970 is available to purchase at Sutherland House Books, Indigo or on Kobo. Check GoodReads for additional retailers.