Rachel is twenty-four, a lapsed Jew who has made calorie restriction her religion. By day, she maintains an illusion of existential control, by way of obsessive food rituals, while working as an underling at a Los Angeles talent management agency. At night, she pedals nowhere on the elliptical machine. Rachel is content to carry on subsisting—until her therapist encourages her to take a ninety-day communication detox from her mother, who raised her in the tradition of calorie counting.

Early in the detox, Rachel meets Miriam, a zaftig young Orthodox Jewish woman who works at her favorite frozen yogurt shop and is intent upon feeding her. Rachel is suddenly and powerfully entranced by Miriam—by her sundaes and her body, her faith and her family—and as the two grow closer, Rachel embarks on a journey marked by mirrors, mysticism, mothers, milk, and honey. 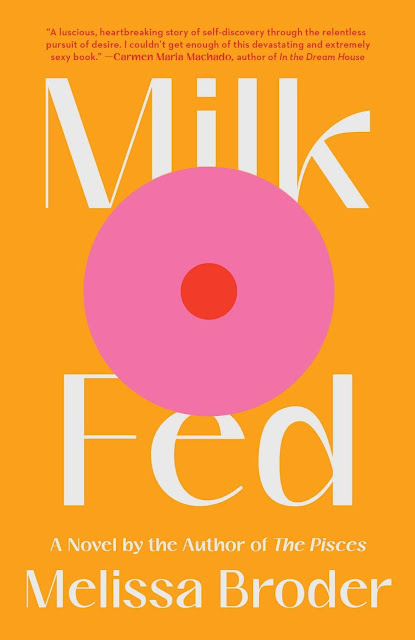 What I thought
I’ll preface this review by stating that I’ve lived with anorexia for close to 18 years and that this book was, at times, a frighteningly accurate portrayal of life with an eating disorder. Melissa’s execution of this is impeccable.
Milk Fed felt like a controversial choice, and I was unsure of whether to review this or not.
It wasn’t until I read an article in Hazlitt and another in Vogue, which truly dives deep into the novel, and why Broder wrote it, that I felt more comfortable reading it. Also knowing that Melissa has been previously diagnosed with anorexia made me feel more comfortable with it.
I’m just days away from long term hospitalization to receive treatment for my eating disorder, and I figured there was no better time than the present to read and review this book. I thought that if I found it to be triggering, at least I would have the support of my treatment team.
I did not, however, find it overly triggering. In fact, I found it extremely relatable. The novel starts out much like my day, ‘All that mattered was what I ate, when I ate, and how I ate it.’
I hadn’t read any of Melissa’s other work, so I wasn’t sure what to expect to be honest, but I felt completely captured by her writing style, as though she had wrapped her words around me. Her prose left me with a desire for more of her. The story in itself I found entirely unique, having never read anything quite like it before.
When referring to her lunch, Rachel, the main protagonist, says, ‘I loved food that came in multiple parts, prolonging the experience. If I could be infinitely eating, I would be. I had to restrict my intake, or I’d never not be putting something in my mouth.’
She continues, ‘As I waited in line at Yo!Good, I plotted the concoctions I would create if I ever found myself magically immune to calories.’
I felt as though she was delving into my very thoughts, and perhaps it’s just because I have an eating disorder that I related so much with this book, but I think there’s much more to it than that. It’s definitely more layered and in depth than just that alone.
Milk Fed is also a story about love, longing, and desire. The need to fill a hole, whether that’s a physical one, using the stomach and food as an example, or the heart, where love is concerned. Rachel feels mistreated by her mother, who may not provide her the nutrition she needs, but is sure to feed her eating disorder.
‘All of my restriction, my efforts at control, as I tiptoed daily around the edge of hunger, were enacted in the name of keeping that demon shut up’
As the story progresses, she meets Miriam, who suddenly gives her permission to eat. That word permission is one known all too well within the world of eating disorders. I speak for myself when I say this, but it’s one that’s pending at each meal, awaiting the permission of another, the validation of another, in order to indulge in that meal. Without it, the reaction is to ‘abstain, abstain, abstain.’
Once she meets Miriam and is accepted into her loving family, she allows herself to be fed, both physically and mentally. She eventually grants herself permission to eat.
Milk Fed reads well and Melissa’s prose is original, erotic and wildly adventurous. Filled with desire, obsession, and sexual fantasies, this book will hold your attention from start to finish.
Melissa Broder is the author of the novels Milk Fed and The Pisces, the essay collection So Sad Today, and five poetry collections, including Superdoom: Selected Poems (Summer 2021) and Last Sext. Broder has written for The New York Times, Elle.com, VICE, Vogue Italia, and New York Magazine‘s The Cut. Her poems have also appeared in The Iowa Review, Guernica, Fence, et al. She is the winner of a Pushcart Prize for poetry. Broder received her BA from Tufts University and her MFA from City College of New York. She lives in Los Angeles.

Milk Fed is available for purchase at Indigo and on Kobo. Check GoodReads for additional retailers.