“Without dark there isn’t light. Without pain there is no relief. And I remind myself that I’m lucky to be able to feel such great sorrow, and also such great happiness.”

In Furiously Happy, a humour memoir tinged with just enough tragedy and pathos to make it worthwhile, Jenny Lawson examines her own experience with severe depression and a host of other conditions, and explains how it has led her to live life to the fullest:

"I've often thought that people with severe depression have developed such a well for experiencing extreme emotion that they might be able to experience extreme joy in a way that ‘normal people' also might never understand. And that's what Furiously Happy is all about."

Jenny’s readings are standing room only, with fans lining up to have Jenny sign their bottles of Xanax or Prozac as often as they are to have her sign their books. Furiously Happy appeals to Jenny's core fan base but also transcends it. There are so many people out there struggling with depression and mental illness, either themselves or someone in their family—and in Furiously Happy they will find a member of their tribe offering up an uplifting message (via a taxidermied roadkill raccoon). Let's Pretend This Never Happened ostensibly was about embracing your own weirdness, but deep down it was about family. Furiously Happy is about depression and mental illness, but deep down it's about joy—and who doesn't want a bit more of that? 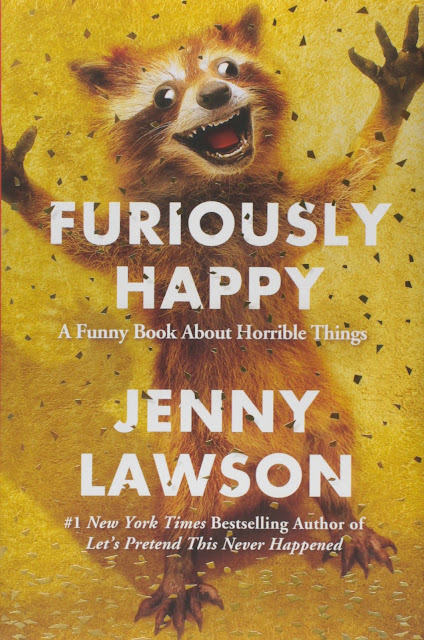 I instantly loved this book, which Jenny wrote to help people fighting mental illness, and also those who have friends and family who are affected by it. I loved every word, sentence, page. Gobbled it up like it was my favourite meal. I thought to myself, did I just take a seriously strong sleeping pill, pass out for a year and release a book called Furiously Happy under a pseudonym? IT WAS THAT RELATABLE.

It was also downright hilarious, and everything I needed, and more, exactly when I needed it. This book has been recommended to me many times, mostly by my boyfriend Charlie who bears the brunt of my mental illness. When I brought up Jenny's name recently, he immediately presented me with a copy of this book and offered to buy me the Jenny Lawson trilogy on audiobook (right after I told him I was having some trouble concentrating with my reading).

This is Jenny's second book, and I hope to read the first, Let's Pretend this Never Happened and her newest book Broken, in due course. For now, on a furiously unhappy mental health day, I'm hoping that Jenny will bring me some joy.

Things have been grim for a while, and I can't guarantee that by the time this review goes live on my website whether I will still be within the comfort of my home, or if I'll be hospitalized, receiving treatment for anorexia. Right at this moment though, I'm still at home, and I just dashed outside in my checkered fleece pyjamas to take a photo of the cover to file away for a future social media post.

The likelihood is, I'll need a reminder of what I read in this book when I do go to treatment. And so this post is to honour that, and to honour Jenny Lawson, for being so open, and so fucking hilarious, when it comes to discussing her (serious) mental health issues.

In the notes from the author section, Jenny says, "I hope to one day see a sea of people all wearing silver ribbons as a sign that they understand the secret battle, and as a celebration of the victories made each day as we individually pull ourselves up and out of our foxholes to see our scars heal, to remember what the sun looks like."

I hope so, too, Jenny. We who suffer with mental illness, often suffer in silence, with an ailment that cannot be seen.

Jenny talks about how when she was growing up, she "fixed" her problems by isolating from others and engaging in an eating disorder. Now, as an adult, she controls her anxiety with medication, individual, and behavioural therapies.

Jenny is like an open book when it comes to talking about her medication use, which I found incredibly inspiring. For so long, I would be ashamed to admit that I was taking medication, afraid it would make me appear weak in front of others. Lawson talks about her use of antipsychotic medications, 'I dare you to find a drug that will freak people out more when they're rifling through your medicine cabinet during parties,' she says.

She goes on to say that whenever she starts to doubt if she's worth the eternal trouble of medication and therapy, she remembers those people who let the fog win, and she pushes herself to stay healthy.

In the middle of the book, just like in the body, there's an appendix: an interview with the author, in which Jenny answers all the questions she assumes the media will ask at her upcoming launch of the book. She puts it in the book, so they won't have to ask her in person, keeping her anxiety at bay. It's an FAQ of sorts, but I found it to be incredibly helpful. In it, she talks about what depression is like, what advice she has for people seeking help, and what doesn't help when you're depressed.

I can't express how much I loved Furiously Happy, and how excited I am to read Jenny's other books. This book brought a smile to my face when I needed it, and many laughs when I needed them, reworking those stomach muscles that forgot how to work from not being used enough.

Known for her sardonic wit and her hysterically skewed outlook on life, Jenny Lawson has made millions of people question their own sanity, as they found themselves admitting that they, too, often wondered why Jesus wasn't classified as a zombie, or laughed to the point of bladder failure when she accidentally forgot that she mailed herself a cobra. Her blog is award-winning and extremely popular.

Furiously Happy is available to buy at Indigo and on Kobo. Check GoodReads for additional retailers.