“Morning is the time for deep breaths, and discovering, ourselves anew in our bodies”

In her youth, Tara was wild. She abandoned her loveless marriage to join an ashram, endured a brief stint as a beggar (mostly to spite her affluent parents), and spent years chasing after a dishevelled, homeless 'artist' - all with her young child in tow. Now she is forgetting things, mixing up her maid's wages and leaving the gas on all night, and her grown-up daughter is faced with the task of caring for a woman who never cared for her.
This is a love story and a story about betrayal. But not between lovers - between mother and daughter. Sharp as a blade and laced with caustic wit, Burnt Sugar unpicks the slippery, choking cord of memory and myth that binds two women together, making and unmaking them endlessly. 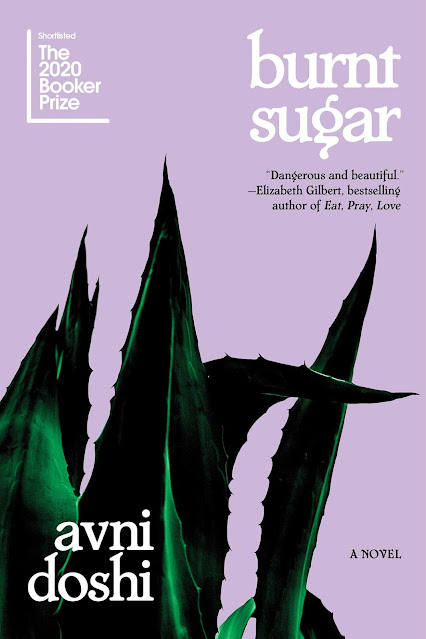 Review
Avni Doshi's debut novel tells the story, at once shocking and empathetic, about love and betrayal between a mother and a daughter.

“I wish India allowed for assisted suicide like the Netherlands. Not just for the dignity of the patient, but for everyone involved,” says Antara, at the beginning of Burnt Sugar.

She’s thinking back to when her mother abandoned her marriage to join an ashram when Antara was just a child, tearing her away from her father and taking her along with her for the wild, and tumultuous journey. Her mother, Tara, was more than a devotee of the ashram’s spiritual leader, Baba, she was also one of his ashram wives.

Antara saw things at the ashram that no child should see. Walking down a hallway one day, she came to a door that was ajar, and there she explains the sounds of what she thought were wild animals, but what turned out to be a couple engaged in sex, “while she lies on a table with her arms spread, a man in white holds her legs open. He is from the sea of white.” She’s referring to the crowds of followers who wear white for Baba. With her mother no where in sight, not paying her visits for weeks on end, Antara is cared for by an older devotee named Kali Mata, an American who came to the ashram after a devastating loss.

Following life at the ashram, her and her mother had a stint as beggars, mostly to spite Tara’s affluent parents for her leaving them and her husband for the ashram. Antara is also sent to boarding school where she suffers greatly under Sister Maria Theresa, also known as "The Terror" who one day, without warning, stabs a pencil right into the back of her palm.

Despite all of this suffering, and everything she’s been through with her mother, the insults hurled at Antara are ongoing throughout the book, with her mother showing constant disappointment in her.

When referring to her first art show, although Antara didn’t tell anyone about it, her mother showed up at the opening anyway. Her work was praised by newspapers as being “exciting and compulsive” remarking that it was “as disturbing as it was fascinating.” When Antara returned home to Pune, her mother was crying and came at her with a rolling pin, calling her a traitor and liar, asking her why she would do a show like that, and asked her to move out of the house. It seemed more like jealousy than a show of maliciousness.

When the ashram leader, Baba, dies, her mother feels a sense of pride, “to be the lover of a great man.” Antara told her that to her, it looked small, cheap even, and was nothing to brag about. The response from Tara is traumatizing as she grabs her daughter by the arms, shaking and slapping her, calling her “a fat little bitch. Have some sympathy! I became a widow today!”

Back to the present moment, and Antara is accompanying her mother to a physical exam at her doctor’s office. She feels she should be sad and grieving instead of angry. Her mother is forgetting, showing signs and symptoms of Alzheimer’s disease. “Don’t bite your nails,” her mother says on their way home. It seems that even with her faltering memory, she still remembers how to insult Antara.

Antara wonders if it’s possible to both want to be with and without her mother at the same time, saying, “At the ashram, I had lived without her and longed for her at the same time, but now that we were together, I would turn corners towards dread, to feeling I had been mistaken, that maybe I did not want her or need her, only to return to the notion that I had lived with all my life, that being without her was hell, misery.”

Burnt Sugar, which was originally published in India in 2019 under the title Girl in White Cotton, is gorgeously vivid, incredibly powerful, and thought-provoking.

The book, which was longlisted for The Booker Prize, switches between life at the ashram and the present day, was engaging and impactful.

In her interview with The Booker Prizes, Doshi says that she hopes to release more novels. I hope so too, since this was a stellar debut.

Avni Doshi was born in New Jersey in 1982 and is currently based in Dubai. She won the Tibor Jones South Asia Prize in 2013 and a Charles Pick Fellowship at the University of East Anglia in 2014.

Burnt Sugar is available at Indigo and on Kobo. Check GoodReads for additional retailers.