"It's important to hold onto your good days; they keep you sane in the face of bad ones."

Overwhelmed with anxiety and closed in with cabin fever from too much time alone in my apartment all day, I was still in my pyjamas when Charlie got home from work. The pandemic had really been getting to me that day, and I'd spent too much time on The New York Times website, engrossed in COVID-19 articles about vaccine distribution and global politics. It had taken a toll and sent me into a spiral of despair and depression that I couldn't seem to claw my way out of.

Charlie knew what I needed. A walk to the Indigo flagship at Broadway & Granville. Any library or bookstore would do, actually, but it was late, and Indigo was still open.

The fresh air helped, and I knew a book would too. 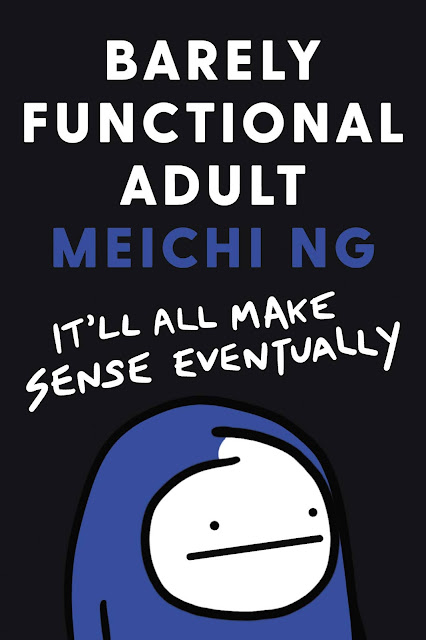 As soon as we arrived, I made my way to the HUMOUR section immediately. Since I review a ton of books, I have quite a few at home kindly sent to me by publishers, but humour isn't a genre I typically review, although perhaps it should be? I need more of it in my life.

I glanced up and down the shelf, stopping halfway down at the letter N, pulled out this intriguing black book with a spine spelling out 'BARELY FUNCTIONAL ADULT' in white bold complimented by a crying graphic. "You're perfect" I thought to myself.

I didn't know anything about the author, her graphic comics, or what the book was about, but something about it called out to me and I knew I needed it at that moment. So I paid, took it home, and started reading it immediately. For the next 5 hours, I was engrossed.

It's funny actually, because when I initially thought about the title Barely Functional Adult, I immediately thought about moving into my first apartment. I was 25 and up until that point I had lived with roommates, always moving into their apartments, so they usually had everything. But after 2 years in Vancouver, it was time for my very own place, a very adult thing to do.

When I moved in, I decided that all I needed were two pieces of furniture. A mattress in the bedroom, and a yoga mat in the living room. Done! I would sleep on the mattress and I would practice and meditate on my mat. The third piece of furniture was a framed art print of Vancouver that my boyfriend chose for me. When he carried it to my apartment he was shocked to see how I was living, and the next day we were in a van on our way to IKEA and Walmart.

He took complete control of the cart at both stores, filling it with cutlery, plates, bowls, cutting boards, measuring cups, adult items. At IKEA, we bought a dining table and chairs, then we went to a furniture store and pre-ordered a couch, and finally a vintage store where we picked up a dresser. In 2 days, the boyfriend I had been dating for 2 weeks, had transformed my apartment into an adult living space. Three years later, we live together, and he still picks out the adult utensils and small appliances and furniture.

Once I opened the book, I knew I had made the right decision in purchasing it. Within pages, I found it incredibly relatable, and downright hilarious. I felt like Meichi was peeping inside my head and writing down my thoughts, but they were actually her thoughts, and we were just feeling the same things, which just gave me comfort in a time of need.

Barely Functional Adult took a massive weight off my shoulders knowing that someone else, and probably tens of thousands of other people are feeling exactly what I'm feeling. And that just made me feel less... weird? And less alone with my thoughts.

I felt myself really resonating with the Glory of Quitting chapter. The struggle of not always knowing what your next professional move is going to be or the initial excitement of new jobs only to find yourself bored a few months to a year later unsure what you're doing or why you're still there. Meichi put it perfectly when she said "Work became so much more tolerable when I decided to resign. I would later learn one of the most liberating decisions one can make in life is to quit a job they hate."

Another thing Meichi really understands and conveys perfectly in Barely Functional Adult is in the Therapy chapter. She says at her first session, "my therapist clearly wanted me to speak, so I gave her a big, dimpled smile and silence that read - I'm not telling you shit."

This made me laugh so much that it brought me to tears, because it reminded me so much of my own therapy sessions. It brought some lightness to them. I would pay my therapist over $200 for 50 minutes then not talk. I would basically act like he was my boss. Even though I was paying him. It didn't work out because, like Meichi, I expected to be fixed after one session. We continued on for 6 months and I just kept expecting to be put back together and fixed, and when I wasn't, I would be disappointed.

Meichi states that although therapy didn't fix her, it "revealed all of my broken pieces at higher fidelity. But maybe that's the point. Embracing how everyone is broken in their own ways and learning to feel okay about it." I really like how she worded this, and it left me deep in thought afterwards since I'm always thinking of other ways to approach therapy.

Barely Functional Adult was everything I wanted it to be and more. I found it incredibly relatable, and really enjoyed the comic books throughout. I haven't read much humour, but I'm making a commitment to add more to my bookshelf after reading this since it really brightened my mood, lifted my anxiety, and made me laugh.

There's already so many people that I want to recommend or gift this book to. It was truly wonderful.

Barely Functional Adult is available at Indigo or on Kobo. Check Harper Collins Canada for other retailers.