An American Marriage by Tayari Jones

“He stood again and cried, not like a baby, but in the way that only a grown man can cry, from the bottom of his feet up through his torso and finally through his mouth. When a man wails like that you know it’s all the tears he was never allowed to shed — ”

Newlyweds, Celestial and Roy, are the embodiment of both the American Dream and the New South. He is a young executive, and she is an artist on the brink of an exciting career. They are settling into the routine of their life together, when they are ripped apart by circumstances neither could have imagined. Roy is arrested and sentenced to twelve years for a crime Celestial knows he didn’t commit.
Though fiercely independent, Celestial finds herself bereft and unmoored, taking comfort in Andre, her childhood friend, and best man at their wedding. As Roy’s time in prison passes, she is unable to hold on to the love that has been her centre. After five years, Roy’s conviction is suddenly overturned, and he returns to Atlanta ready to resume their life together. 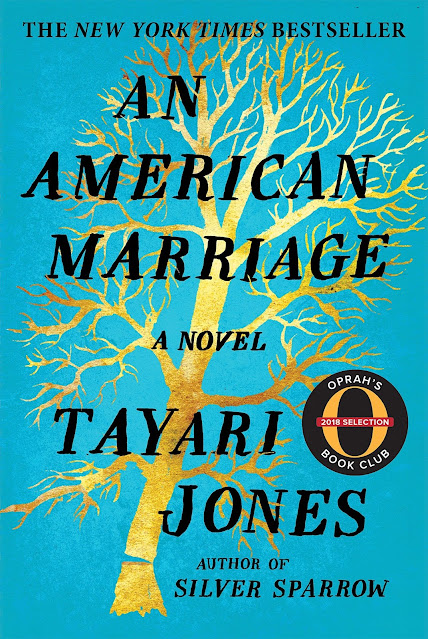 What I thought
I picked up this book at Indigo a few months ago, and I recently realized that it had overstayed its welcome on my bookshelf, as it sat unopened. I borrowed the audiobook from the Vancouver Public Library as well, so I could follow along with the physical book, and also because I wanted to crochet at the same time.
An American Marriage starts out with Roy describing his life, “Atlanta is where I learned the rules and learned them quick. No one ever called me stupid. But home isn’t where you land; home is where you launch. You can’t pick your home any more than you can choose your family.” He goes on to talk about his marriage with Celestial, and concludes with the night that would forever change the outcome of his life.
Afterwards, we meet his wife Celestial. By the time I got to this part of the book, I was completely within the grips of it. There’s no separating me from this novel now, I was thinking to myself. I was also thinking, ‘Why did I wait so long to read this?’
I really liked Celestial, and how she was portrayed in the book. Her personality really came through in Tayari’s writing. I found her sweet, charming, and affable. The audiobook really enhanced this perception.
When Roy goes to prison, he and Celestial correspond with one another via letter. I found the letters to be so layered with depth and emotion. It was heartbreaking to see things from both sides, Celestial living life and following her dreams on the outside, with Roy on the inside, his life on hold.
In one of Roy’s letters to Celeste, he says “Forgive the cliché, but I hope you are sitting down. You might want to pour yourself a glass of wine because this will blow your mind.”
At this point, I was thinking how mind-blowing the book itself was. It’s one of the most absorbing works of fiction I’ve read for a while. The storyline and characters felt so authentic that I felt like I could have been reading about the lives of real people.
An American Marriage is extremely well written, its prose page-turning and powerful. I felt so drawn to Tayari’s writing style, tempted far too often by my highlighter.
“Celestial isn’t the kind of singer you would want at your wedding. While her mother is a gravity-defying soprano, she is a scotch-and-Marlboros alto. Even when she was a little girl, her voice was like the middle of the night. When she gives a song, it isn’t entertaining; rather, it sounds like she is telling secrets that are not hers to reveal.”
An example of Jones’ gorgeous writing style.
An American Marriage was completely addicting, I couldn’t put it down. It held me captive from the moment I picked it up, throughout the entire book, first to last page. There’s no dip or lull in the storyline, it’s very engaging.
There’s a lot of hype around this book, and when it comes to hyped up books, I sometimes find myself disappointed because they fall flat when I read them. But this one exceeded any expectations I had.
It was exceptional.
New York Times best-selling author Tayari Jones is the author of four novels, most recently An American Marriage. Published in 2018, An American Marriage is an Oprah’s Book Club Selection and also appeared on Barack Obama’s summer reading list as well as his year-end roundup. The novel was awarded the Women’s Prize for Fiction (formerly known as the Orange Prize), Aspen Words Prize and an NAACP Image Award. It has been published in two dozen countries.

An American Marriage is available to buy at Indigo and on Kobo. Check GoodReads for additional retailers.