American Food: A Not So Serious History

“It might seem like a silly time to look backward, just when American food is finally getting good. After a couple of dark decades of foods that were fast and frozen or French continental, this country's cooking isn't an international joke anymore, the kids' meal in the fancy restaurant of the world.”

A clever and whimsical illustrated history of 26 iconic American foods, from Ambrosia to Zucchini Bread
This captivating and surprising tour of America’s culinary canon celebrates the variety, charm, and occasionally dubious lore of the foods we love to eat, as well as the under-sung heroes who made them. Every chapter, organized from A to Z, delves into the history of a classic dish or ingredient, most so common we take them for granted. These distinctly American foods, from Blueberries and Fortune Cookies to Pepperoni, Hot Wings, Shrimp and Grits, Queso, and yes, even Xanthan Gum, have rich and complex backstories that are often hidden in plain sight, lost to urban myth and misinformation. American Food: A Not-So-Serious History digs deep to tell the compelling tales of some of our most ordinary foods and what they say about who we are—and who, perhaps, we are becoming. 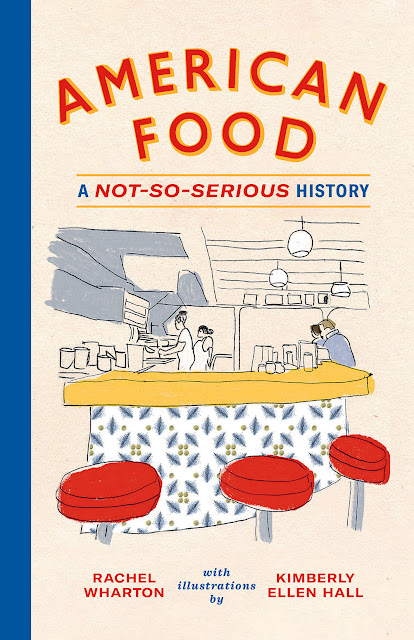 I remember the first time I went to America. Oh boy, I was so excited about the food. I was terribly excited about the diners with their menus, as thick as telephone books.
My dad and I had talked about going to Denny’s for years, and I had dreams of the pancakes at iHop, as high as the skyscrapers in New York City. I still remember the first time I had those strawberry cheesecake pancakes.
I actually just moved to a new apartment building in Vancouver, across the street from an iHop but guess what? The day I moved in, they closed that iHop. Can you believe it?

I don’t really know anything about the history of American food, though. It wasn’t until recently, when I went to an exhibit at the Polygon Art Gallery in Vancouver, called Feast For The Eyes, that I started to think more about the history of food in general.
The exhibit explored the rich history of food as one of photography’s most prevalent and enduring subjects. There were many historic cookbooks and advertisements on display though, and it was deeply thought-provoking.

I came across Rachel’s book after that, and was excited to dive in.
I loved learning the history of the donut — I mean seriously, who knew there would be a hole history (pardon the pun) there… Rachel found out from researcher, Alexis Iammarino, that the first mass-produced donut cutter was invented in 1872. Iammarino is considered one of the greatest living experts on American donut history — what a title, eh?
I like the recipes that are sprinkled throughout - I’ll take a serving of the Red’s ham and cheese hoagie please.

It was also interesting to learn about foods that I knew nothing about, like vinegar pie, also known as desperation pie. It actually sounds pretty good, and there’s a recipe for one in the book, too, so I might give it a go sometime.
Learning about the origins of xanthan gum was cool, because I use it a lot at home for gluten-free baking. According to the book, xanthan gum was discovered in the 50s at the research center for the US Department of Agriculture.
I was very excited to read about yellow mustard only because I put it on everything and some of my friends call me Monsieur Moutard. ‘When R.T. French & Sons created yellow mustard in 1904, they were doing what Americans have so often done to foods from other places. They took a rustic, earthy, intensely flavored icon, then smoothed out the flavor and turned it Technicolor. But with yellow mustard - known in other parts of the world as American mustard - maybe that’s a beautiful thing,’ Rachel states in the book. I’ll take mustard from any part of the world, it doesn’t have to be American. In fact, American mustard is probably my least favourite.

This book does a really deep dive into the history of each chosen food, and I absolutely adore the illustrations by Kimberly Ellen Hall, that accompany each one. When I first saw the book, I assumed it would be more concise, much more of an overview with not a lot of info, but I was surprised, I actually learned way more than I expected and that’s pretty sweet. I think Rachel and Kimberly did a fantastic job.
I love reading and writing about food so this was a fun one for me. I really enjoyed it. It’s a good one to keep on the shelf if you’re a foodie like me, so you can pull it out for future reference, when needed, especially for food related articles and blog posts.
I recommend this one if you have a keen interest in food or history, or if you’re looking for a cool gift for someone.
Rachel Wharton is a James Beard Award-winning food writer. Wharton is the author of Edible Brooklyn: The Cookbook and co-author of Korean Home Cooking and F*ck, That’s Delicious with Action Bronson. She lives in New York.
Kimberly Ellen Hall is an award-winning artist and art professor with a thriving illustration, print, and pattern studio, Nottene. She lives in Philadelphia.

American Food: A Not-So-Serious History is available at Indigo and on Kobo. Check GoodReads for a list of other retailers.