All Adults Here by Emma Straub

‘Astrid Strick had never liked Barbara Baker, not for a single day of their forty-year acquaintance, but when Barbara was hit and killed by the empty, speeding school bus at the intersection of Main and Morrison streets on the eastern side of the town roundabout, Astrid knew that her life had changed, the shock of which was indistinguishable from relief.’

When Astrid Strick witnesses a school bus accident in the centre of town, it jostles loose a repressed memory from her young parenting days decades earlier. Suddenly, Astrid realizes she was not quite the parent she thought she’d been to her three, now-grown children. But to what consequence?

Astrid’s youngest son is drifting and unfocused, making parenting mistakes of his own. Her daughter is intentionally pregnant yet struggling to give up her own adolescence. And her eldest seems to measure his adult life according to standards no one else shares. But who gets to decide, so many years later, which long-ago lapses were the ones that mattered? Who decides which apologies really count? It might be that only Astrid’s thirteen-year-old granddaughter and her new friend really understand the courage it takes to tell the truth to the people you love the most.

In All Adults Here, Emma Straub’s unique alchemy of wisdom, humour, and insight come together in a deeply satisfying story about adult siblings, aging parents, high school boyfriends, middle school mean girls, the lifelong effects of birth order, and all the other things that follow us into adulthood, whether we like them to or not. 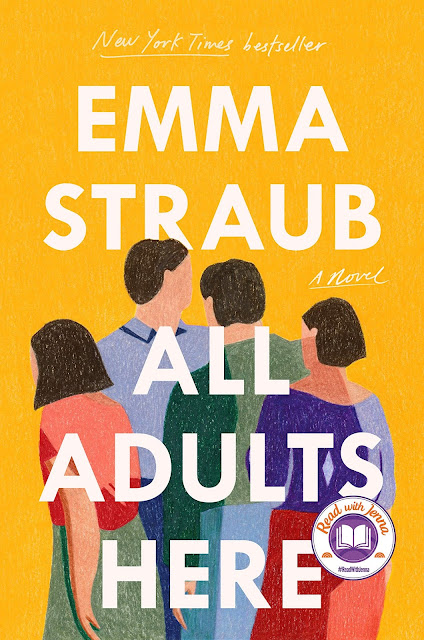 What I thought
Nothing can happen in a small town without everyone knowing about it. That was my first thought when reading and listening to this fun and joyous novel by Emma Straub.
The audiobook, narrated by Emily Rankin was quite lovely. I thought her voice fit perfectly.  It seemed to flow in a lyrical and poetic tone, carrying the story through with the lightness one would expect from a Straub novel. It was well paced, and Emily’s intonations were distinct enough to be able to tell the characters apart from one another.
The story itself, set in Clapham, was absolutely charming. It was an enchanting and lighthearted read and listen, one I could do while engaging in other tasks, with the voice of Rankin keeping me company while I did the dishes and walked my dog. The book, keeping me company in the evening while I enjoyed a cup of tea, enjoying Emma’s prose which is sweet and beautifully written.
Throughout All Adults Here the reader is introduced to each member of the Strick family, and other characters, each with their own story to tell, and each facing their own challenges in different phases of their lives. With some reading between the lines, the reader can find a much more in depth stories with each character.
I felt like I could really relate to August throughout the book, ‘At camp, he could be himself, and people loved him for it. At school, costumes were required.’
It felt like he was constantly trying to reinvent himself to fit in, like he didn’t feel like he was good enough. Straub was able to capture this with such accuracy through the storyline and her prose. I felt an attachment to August, as though Emma was speaking the exact thoughts I had at that age.
‘This was what the Sullivans did. They bought old things by the bushel and, through their touch, transformed them into something desirable, something new. August wished that his parents could work their magic on him too.’
This book had some heavy themes, and definitely could have been a heavier read, but it wasn’t, it kept its light, airy, and even humorous feel from start to finish.
I thoroughly enjoyed this one and finished with the desire to read more even more by Emma Straub. I purchased the hard copy from Indigo, and borrowed the audiobook from Vancouver Public Library.
This is a great vacation read, one to enjoy on the beach, or better yet, a nice one to read while you curl up on the sofa with a hot cup of tea or coffee. With themes of acceptance and inclusivity, I guarantee you’ll enjoy getting to know the characters in this book just as much as I did.
Emma Straub is the New York Times‒bestselling author of the novels All Adults Here, Modern Lovers, The Vacationers, Laura Lamont's Life in Pictures, and the short story collection Other People We Married. Straub's work has been published in twenty countries, and she and her husband own Books Are Magic, an independent bookstore in Brooklyn, New York.

All Adults Here is available to purchase at Indigo and on Kobo. Check GoodReads for additional retailers.