A Very Punchable Face: A Memoir by Colin Jost

“And some of you, I’ll admit, were duped. Because half the copies of this book were titled Becoming 2: Michelle’s Got More to Say. And for that I apologize, even as I continue to fight Mrs. Obama in court”

If there’s one trait that makes someone well suited to comedy, it’s being able to take a punch—metaphorically and, occasionally, physically.

From growing up in a family of firefighters on Staten Island to commuting three hours a day to high school and “seeing the sights” (like watching a Russian woman throw a stroller off the back of a ferry), to attending Harvard while Facebook was created, Jost shares how he has navigated the world like a slightly smarter Forrest Gump. So, I didn’t know who Colin Jost was before reviewing this book. Well, I had a slight idea. I knew him from the humour section of my local Indigo as the guy whose face I wanted to punch. Not literally, of course! His book, A Very Punchable Face stands out among the others in that section, and I often wondered who and why would anyone want to punch that lovely face? He looked like a pretty decent guy to me, at least from the cover.
As with any humour book I review, I got the audiobook to go along with it, which I borrowed from Vancouver Public Library. Listening to the audiobook, along with the hard copy, just enhances the fun. Any book that tells a joke in the author’s voice is going to be way better than if I told it in my mundane accent, I can assure you of that.
The book opens with Jost saying, “I’ve wanted to write a book my entire life. Partially because (as you will soon learn) I have difficulty taking what’s inside my head and saying it out loud. For someone whose job is essentially speaking, this creates a deep anxiety and sometimes a paralysis that keeps me from expressing what I’m really thinking. Whereas the act of writing allows my brain to function in a different way. I can write and not be afraid of what I’m going to say” 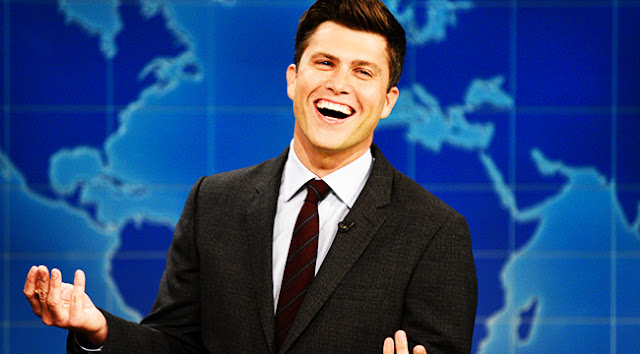 Reading Colin’s bio beforehand, I never would have thought he suffered from any kind of anxiety. He talks about his being bullied growing up, and says the best way to deal with bullies is to laugh at them.  F*ck bullies.
This just made him so much more relatable to me, and I appreciated his openness and vulnerability here, I honestly didn’t expect it, and it made me take an immediate liking to him.
There’s a chapter in the book that discusses Colin’s Staten Island Ferry commute, “The bins under the seats were marked LIFE JACKETS but should have been marked A HUNDRED RATS LIVE HERE. The ferry is known for its amazing views of the Statue of Liberty, but it’s also a great place to watch a raccoon eat a passenger’s leftover meth. And look, the raccoon is reading the New York Post! Cuuuuuuute!”
I found this absolutely freaking hilarious. I’ve never taken the Staten Island Ferry when I’ve been in New York, and Jost absolutely did not sell me on it. I have no plans to ever take it, thanks Colin. I seriously recommend the audiobook for this chapter. And don’t recommend listening to it at 5am when the rest of the house is asleep — sorry fam!
Colin’s hunger to succeed and passion for work shine through his writing. Regardless of his anxieties and fears of speaking, he wanted to write comedy. He studied at Harvard and really wanted to work on The Harvard Lampoon, ‘a place where aspiring comedy writers can spend all their free time with other aspiring comedy writers and try to make each other laugh.’
It’s like an exclusive club, and extremely hard to get into, but that didn’t stop him from trying. He wrote thirty pieces his first semester and was rejected, wrote fifty pieces his second semester and was rejected again. It wasn’t until his third semester, when he wrote constantly for eighteen months, that they finally accepted him. “When they told me I got it, it was the happiest moment of my life, and the first time I ever felt like I belonged somewhere,” he writes.
The remainder of the book talks about other things about Jost that will both surprise and confuse you, like how Jimmy Buffett saved his life, how Czech teenagers attacked him with potato salad, how an insect laid eggs inside his legs, and how he competed in a twenty-five-man match at WrestleMania (and almost won).
You’ll go behind the scenes at SNL and Weekend Update (where Jost has written some of the most memorable sketches and jokes of the past fifteen years). You’ll experience the life of a touring stand-up comedian—from performing in rural college cafeterias at noon to opening for Dave Chappelle at Radio City Music Hall.
For every accomplishment (hosting the Emmys), there is a setback (hosting the Emmys). And for every absurd moment (watching paramedics give CPR to a raccoon), there is an honest, emotional one (recounting his mother’s experience on the scene of the Twin Towers’ collapse on 9/11).
Told with a healthy dose of self-deprecation, A Very Punchable Face reveals the brilliant mind behind some of the dumbest sketches on television, and lays bare the heart and humour of a hardworking guy—with a face you can’t help but want to punch.
Colin Jost is a head writer at Saturday Night Live, a Weekend Update co-anchor, and a touring stand-up comedian. He has five Writers Guild Awards, two Peabody Awards, and a PETA Elly Award for the sketch “Diner Lobster.” He’s also been nominated for thirteen Emmy Awards and lost every time. He lives in New York and in the hearts of children everywhere.

A Very Punchable Face is available at Indigo and on Kobo. Check Penguin Random House CA for additional retailers.