Skip to main content
Labels
Posted by Sean Loughran May 24, 2021

The Secret Life of Groceries by Benjamin Lorr

“When I walk into a grocery store and look at all the products you can choose, I say, “My God!” No king ever had anything like I have in my grocery store today.” — Bill Gates

The Secret Life of Groceries is the product of five years of research, hundreds of hours of interviews, and thousands of hours of tracking down and working alongside the buyers, brokers, marketers, and managers whose lives and choices define our diets. 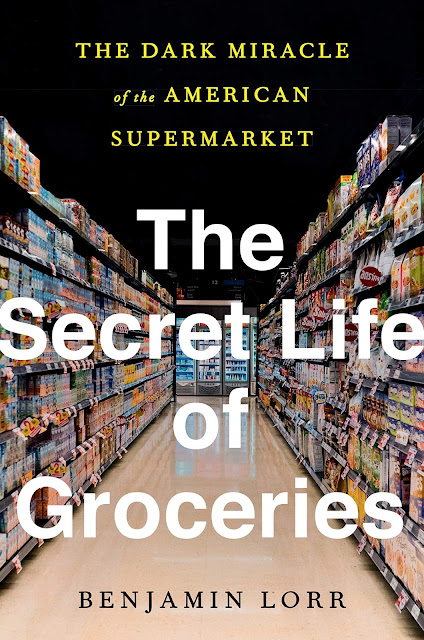 The book discusses various grocery stores such as the iconic Trader Joe's, Whole Foods, 7-Eleven, Piggly Wiggly, and Aldi.
As readers, we learn about the beginning of Trader Joe's, their expansion and success in America and how when they declined to open a location in my city of Vancouver, a thriving import/export business named Pirate Joe's opened in its place in 2012, sneaking authentic TJ's product across the border to sell.
Owner Michael Hallat would make weekly trips to the Washington stores spending up to $5000 on each trip, selling them at a $2-3 markup at Pirate's. Hallat found himself banned from many TJ's locations, even cross-dressing on one occasion, and in 2017 the store was closed down.

I've always relied heavily on my Californian friends for my Trader Joe's cookie butter, so I'd never had to cross the doors at Pirate's thankfully, although I'd probably make a trip now for the infamous cauliflower gnocchi. Spending a week or two in Los Angeles, you'll usually find me at TJ's with a cart full of the Chinese style chicken salads; cheap, delicious, and easy to eat on the go.
Learning about 7-Eleven was pretty fun since my partner and I go there often for late night Slurpee's when it gets warm out in Vancouver. Reading about their expansion from under 100 stores in 1951, to 398 in 1965, with plans to open an additional 2,261 by the end of the decade just blew my mind. A quick Google search tells me that there are now a whopping seventy thousand 7-Eleven stores in 18 countries worldwide.
I've visited several in Los Angeles, New York, Toronto, Vancouver, and Tokyo. I have to say, the 7-Eleven in Japan is an exquisite experience.
It was fascinating to read about the packaging changes that the food industry has gone through over the years, specifically changes in materials from fragile and expensive glass jars to cheap and hardy tin, and containers that were once hand made and time-consuming, that can now be customized and pumped from a conveyor belt, taking absolutely no time at all.
Reading about Julie and her Slawsa brand, I was sold, immediately Googling the brand, planning a trip to my local Safeway to pick up a jar. Unfortunately it's not yet available in Canada, but I'll be looking for you, Julie!

Julie's passion for her product shines brighter than the sun. 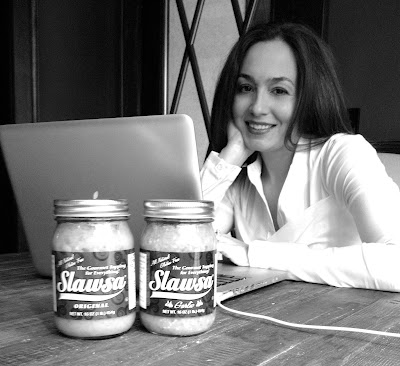 Benjamin talks about his time working as a store clerk at Whole Foods for 2 months, as research for this book. Once he got the job, he used his employee discount card, accidentally ingesting 1.5 hours of his salary at the hot bar, realizing then that he'd be better off brown bagging his lunch.
The Secret Life of Groceries is incredibly well researched. Five years in the making, with Ben's project taking him on fishing boats littered with the debris of mashed fish left for weeks at a time to roast in the sun. Another time he found himself in Nakhon Si Thammarat, Thailand, where he stood ankle deep in rotten fish, which would eventually be blended into a protein base for pet food, food for fish farms, and feed for hungry little shrimp.
I learned a lot from The Secret Life of Groceries, things like how the average store has 32,000 individualized products while the biggest have more than 120,000. This is a book that'll live on my shelf for a number of years.

The Secret Life of Groceries is available at Indigo and on Kobo. Check Penguin Random House Canada for a list of all other retailers.