The Class by Chris Hedges

“Criminals, it turns out, are the one social group in America we have permission to hate.”
- Michelle Alexander, The New Jim Crow

Chris Hedges has been teaching in New Jersey prisons for over ten years. For three of those years he's taught non-credit college level courses. One of the prisons he teaches at is the East Jersey State Prison in Rahway, which is hard to miss with its boarded up windows, dull white paint giving it an institutional look and feel, with each wing enclosed by metal bars. There's no mistaking this place for anything other than a prison. 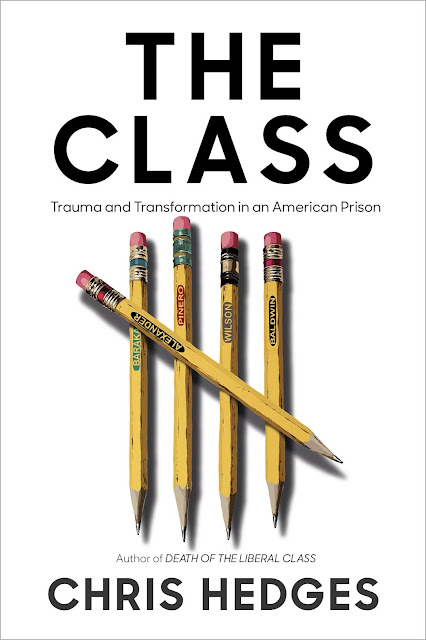 You might be familiar with some history of Rahway, as it was known as then, if you've read The Sixteenth Round, by Rubin Hurricane Carter, chronicling his time spent there, before his campaigned release in 1985.
Many scenes of well known movies have been filmed at Rahway such as Crazy Joe, Malcolm X, He Got Game, and Ocean’s Eleven.

Chris taught his first class in 2010 at the Wagner Correctional Facility. He taught American history to men in their teens and early twenties. He remembers his students taking notes furiously as he plowed through the lectures as though a veil was lifted, through which they could see the truths of their history.
Hedges writes, “Education is not only about knowledge, it is about inspiration. It is about passion. It is about the belief that what we do in life matters. It is about, as James Baldwin writes in his essay The Creative Process, the ability to drive “to the heart of every matter and expose the question the answer hides.”
Hedges had a zero tolerance policy for unruly behaviour in his classes, reserving education for those who truly had a thirst for it. Hedges seemed to have an incredible passion for what he was doing, teaching these men the works of Shakespeare, James Baldwin, and Dutchman by Amira Baraja.
It was through these teachings that Hedges discovered he was working with some of the most talented writers he’d come across in his career, which led to the writing of a play that would draw on their collective experiences.
The men would become more than students then. “They would create. They would give expression to their experiences, their pain and suffering, their hope, their grief, and their loss. They would do this not as individual students but as a collective. They would validate their lives, if only to one another.”

Rehearsing for the play seemed to resurface trauma for some of the men, but this time, at least through what I gather from Chris’ writing, there appeared to be more of a companionship, togetherness, and supportive environment, a bonding of sorts, for these moments to come up, and be emotionally worked through when they did.
The twenty-eight students, who cumulatively had spent 515 years in prison, settled on the title Caged.
Hedges speaks of prison with great detail, such as the size of the cells, the day-to-day living conditions, and schedules of the inmates, whom he refers to as his students. He talks about his interactions with them as though they are his friends.
Although he had his choosing of where he could have taught, having worked at NYU, Columbia, Princeton, and The University of Toronto, he had found his calling by working in the prison system.
As he mentions in the book, he was inspired by James Baldwin, also the son of a preacher, and George Orwell, and wanted to use his writing as a weapon. He had decided early on that he would amplify their voice, document their suffering. He would name the many injustices being done to them.
This is felt in the book, Hedges campaigning for those incarcerated, at first using this book as a platform to, using his voice for those who are voiceless and living in cages, and secondly, by offering forth a second lease on life, educating those kept behind the walls and bars of a maximum security prison.
A rare, incredible, but devastating glimpse into the justice system in the United States. I was utterly blown away by this book, and the work that Chris Hedges continues to do, despite all that seems to go against him and his work.
I opened this review with a quote from Michelle Alexander, from her book The Jim New Jim Crow, which deems these individuals as characterless and purposeless. I believe this book by Chris Hedges proves that this is indeed the complete opposite of what we have been led to believe as a society.
At parts of this book, I found myself with chills. One moment in particular stays with me. Students are handing in various assignments and papers, “One of the most gifted students in the class, and who I could sense was a talented writer, handed in dramatic passes that read like bad television scripts. Subsequently, I learned that he had been framed for his crime, had little experience on the streets, and based his portrayal of violent thugs on popular culture and prison lore, which invariably romanticizes gangsters. He wrote, in all capital letters at the bottom of each of his papers, “I AM INNOCENT.”
I cried many times reading the essays, poems, plays, and course assignments worked on by these incarcerated individuals, as they discussed their histories, deep, raw, and unspeakable traumas, it wounded me greatly as a reader. They did not speak of their crimes, murders, rapes, and other unspeakable felonies, so I didn’t see that side of them. What I saw was a side that was deeply affected and impacted, and a side that was still human, with a heart that beats just like mine.
Chris Hedges is a Pulitzer Prize-winning journalist who was a foreign correspondent and bureau chief in the Middle East and the Balkans for fifteen years for The New York Times. He previously worked overseas for The Dallas Morning News, The Christian Science Monitor, and NPR. He is the host of the Emmy Award nominated RT America show On Contact. Hedges, who holds a Master of Divinity from Harvard University, is the author of several books and was a National Book Critics Circle finalist for War Is a Force That Gives Us Meaning. He is married to Eunice Wong, actress and teacher. Eunice teaches poetry in New Jersey State Prison, the men’s supermax prison in Trenton.

The Class by Chris Hedges is available for pre-order at Indigo. Check Penguin Random House CA for additional retailers.