Swimming in the Dark by Thomasz Jedrowski

“All I wanted was to stand there and take you in. You opened your eyes, gray-blue and brilliant. You looked at me, and my heart skipped a beat.”

SWIMMING IN THE DARK

He's 22 when he's remembering Beniek, the two of them, 9 years old at the time, riding across the iron bridges over the calm, Oder River. It's a Tuesday, right after Bible Study. The look on Beniek's face is one of pure joy, utter freedom.

Then comes the darkness, on the day of their communion. They'd planned to be there together but Beniek doesn't show up.

Ludwik can't seem to shake the memory of him. It's hard to forget your first love. 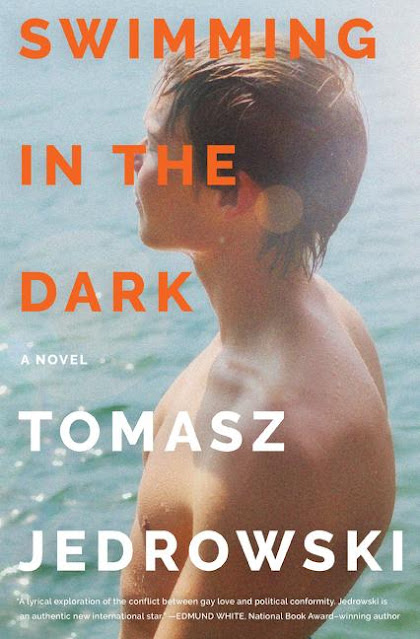 He's at school now, and a requirement to graduate is the completion of an agricultural camp program which means leaving his hometown of Wroclaw for a while.
"I had always liked the act of leaving, the expanse between departure and arrival when you're seemingly nowhere, defined by another kind of time."
It's at camp that he first lays eyes on Janusz, noticing every single thing about him.
The two spend time together getting to know each other and swimming in the nearby lake each evening. Ludwik's desire growing stronger, his affection deepening, each moment they spend together. Eventually, their romantic bond intensifies.
Ludwik loses track of the days spent at the lake district after camp, feeling that each day was a whole new world, every moment new and unrepeatable. It was as though he'd shed a skin and left his previous life behind.
Back in the city, away from their summer dazed dreams, they're hit with the harsh realities of Communist Poland.
“We kissed. You were mine. I realized then that this was the only thing that counted. Nothing else had ever existed. Just our lips and hips and sighs.”
What I thought
I was initially quite turned off to find the book compared to Call Me By Your Name, but with it consistently showing up on my Instagram and GoodReads feed, I decided to give it a go. It was in fact nothing like Call Me By Your Name.
An extremely powerful love story between two young men in Communist Poland. Jedrowski's first novel, in fact, was breathtaking.
This book moved me to tears. And not just the watery eyes that you can blink away, I mean physical, sad, ugly, don't look at me tears.
When describing intense emotions like falling in love, or feeling intense fear, anxiety, loss, and pain, Jedrowski conveys it with such fine detail that it can be felt as almost a physical blow to the reader. He must have experienced and studied these emotions and feelings with such attention to detail that he can convey them so perfectly, and so beautifully.
Thomasz has such an incredible, and visual way of story telling, unique to him, it's unlike anything else I've read. Made up of stunning similes and metaphors, the prose is gorgeous and poetic. I've given this book 5 stars on GoodReads, it's one of the best novels I've read this year.
Tomasz Jedrowski is a graduate of Cambridge University and the Université de Paris. Born in Germany to Polish parents, he has lived in several countries, including Poland, and currently resides outside Paris. This is his first novel.

This wasn't a gifted copy or ARC, I purchased it at Indigo. It's also available on Kobo or you can check Harper Collins Canada for a list of other retailers.