Skip to main content
Labels
Posted by Sean Loughran May 25, 2021

"We as a profession have caused an epidemic that is bigger than the HIV epidemic. We have more deaths from drug overdoses than occurred at the peak of the HIV/AIDS epidemic in 1995. The cause in the opioid epidemic starts with getting a prescription of opioids from physicians. We weren’t recognizing — I certainly wasn’t recognizing — the extent to which we were putting people at risk."
— Dr Atul Gawande

DB00497. This number might mean nothing to you. Or perhaps you've seen it somewhere before, in a pharmacy, a medicine cabinet, or if you're a lawyer specializing in medical lawsuits then you've very likely seen it on a document. If you're working on a court case involving a member of the Sackler family, you probably know this number by heart.
This number is a Drug Bank Accession Number, a way to identify a prescription medication if needed. This DB leads to Oxycodone, a semisynthetic opioid analgesic, used as an immediate release product for moderate to severe pain and as an extended product for chronic moderate to severe pain.
It comes with the following warnings: addiction, withdrawal, and overdose.
The Government of Canada reported that there have been 19,355 apparently opioid toxicity deaths between January 2016 and September 2020. Of those, 1,705 occurred between July and September 2020. This represents the highest quarterly count since national surveillance began in 2016. This number also represents a 120% increase from the same time frame in 2019.
In Patrick Radden Keefe's new book, Empire of Pain, he investigates the Secret History of three generations of the Sackler Family and their involvement in Purdue Pharma, a privately held company, based in Stamford, Connecticut, that developed the prescription painkiller OxyContin. 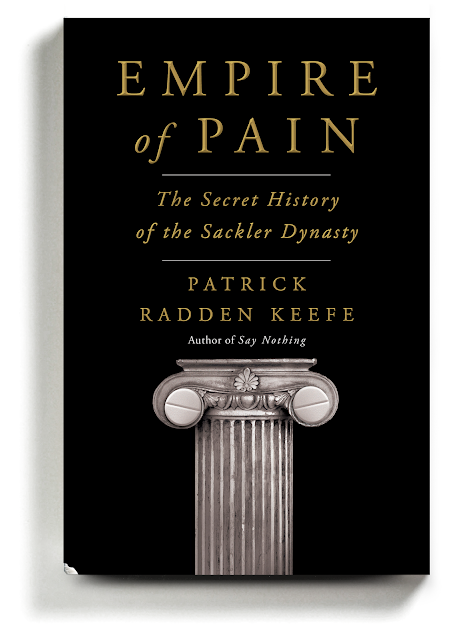 Have you ever spent a weekend in New York hopping from one museum to the next, or perhaps in Paris at the Louvre to spot the Mona Lisa? Maybe you've also spotted the name SACKLER mounted onto these infamous buildings like The Metropolitan Museum of Art, the Guggenheim, and the Louvre. You may have taken a course or browsed a collage funded by the family such as Columbia, Oxford, Harvard, Tufts, or a dozen other universities that they pour money into.
The name is EVERYWHERE.
People who knew of the Sackler family knew only of them as philanthropists, givers. The endless supply of wealth had always been mysterious until people became aware of how much money Purdue Pharma was bringing in.

The initial tagline of OxyContin, 1995

In 1995, OxyContin came on the scene, produced by Purdue Pharma. Upon its initial release, it was celebrated as a medical breakthrough. It was first reserved and used for end of life care. However, that market just wasn't big enough for the greedy Sackler's. They decided to change the positioning of the drug and market it not only for severe pain, but also for moderate pain, opening up the market to another 40-50 million Americans. 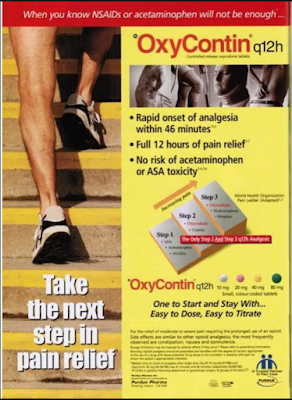 The sales representatives were out in full force, persuading doctors that the drug wasn't addictive, even though they didn't know that yet. Some say doctors aren't easily swayed when it comes to accepting new medications from pharmaceutical companies, but uncovered documents show Purdue spending $9 million dollars in one year on food alone, wining and dining physicians.
This reminded me of a fantastic book I read a while ago, Confessions of an Rx Drug Pusher by Gwen Olsen. Olsen talks about her life as a former sales rep in the pharmaceutical company in grave detail, giving readers a chance to look at the dirty dealings that go on between these companies and physicians that eventually lead to the prescriptions that end up in our very own hands.
It was about a year after the drug's release that the OxyContin started showing the opposite of what was expected. People were overdosing, abusing it, becoming addicted, and even dying. At this point, the Sackler family had the power to pull the plug, or pivot the marketing.
They had the power to change what was happening. But they sat back and watched. 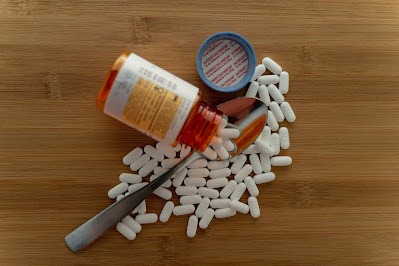 The Sackler family said publicly in the year 2000 that they had read about the effects of OxyContin in the media, about 4 full years after the drug had been on the market. Radden Keefe discovered internal documents that prove this wrong, showing that the Sackler's had proof of the problems the drug was causing within the first year, and they didn't do a thing to change it. They thought the concern was the drug abuser, and not the drug they had created.
So here we are, all these years later, over 25 years since its creation, almost half a million Americans dead, and many more worldwide, while the Sackler swim around in billions of dollars of wealth, refusing to accept any part in this opioid crisis?
Incredibly well researched and an exceptional read, I wouldn't expect anything less from Patrick Radden Keefe having read Say Nothing. He's a remarkable writer, and knows how to keep a reader engaged. This book has the power to move a mountain.
At over 900 pages, there's a heck of a lot more that I could write here, but I tried to keep this short, and recommend buying the book, or the audiobook. Keefe also did a fantastic interview with The New York Times which you can find here for free.
It's dark, deeply moving, and incredibly sad to think of the damage that the opioid crisis has had on the world. If only the billions of dollars that were earned from selling this drug could be used to help solve the problem it created.

Empire of Pain is available at Indigo and on Kobo. Check Penguin Random House Canada for a list of other retailers.