Skip to main content
Labels
Posted by Sean Loughran May 21, 2021

Diary of a Young Naturalist by Dara McAnulty

"When the blackbird came, I could breathe a sigh of relief. It meant the day had started like every other. There was a symmetry. Clockwork. And each morning I'd listen and touch the shadows, not wanting to open the curtains and wake everyone up. I never ever wanted to destroy that moment."

DIARY OF A YOUNG NATURALIST

"I'm Dara, a boy, an acorn," the book opens. Diary of a Young Naturalist, authored by Dara McAnulty, was a special read for me, because it's set in the very place in which I grew up. When I saw this book, and heard about Dara and his adventures, I was eager to learn more about him. I was inspired.

Side note: Dara is the Irish for "oak" and when I first received and opened this book, I was standing beside the oak tree outside my heritage apartment building, which is located on Oak Street in Vancouver. Something fun to share with you before I dive into this wonderful story. 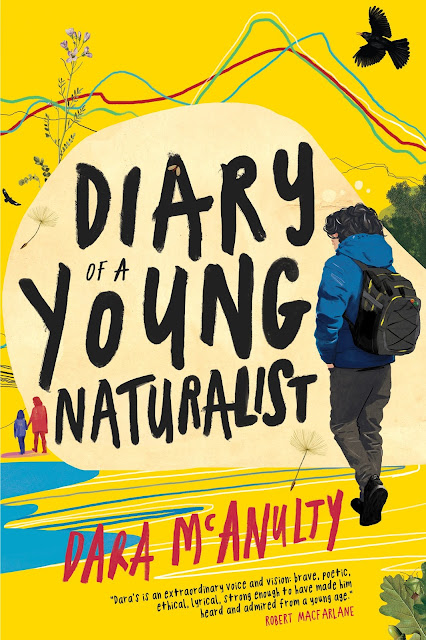 I’ve read Wild by Cheryl Strayed, Becoming Odyssa by Jennifer Pharr Davis, and A Walk in the Woods by Bill Bryson, and come away from those books with a refreshed lease for life, and a desire to get out in nature and go hiking. I’ve frequented stores like MEC, The North Face, and Patagonia, where I’ve packed my imaginary rucksack and envisioned myself hiking the Pacific Crest Trail or Appalachian Trail.
Never did I think about getting out into the wild on the very terrain in which I grew up though. The soil on which I was born 28 years ago. Northern Ireland.
Reading Diary of a Young Naturalist made me want to put on my hiking puts and explore my home country, which I would have done if it wasn't a pandemic, and I wasn't now living in Vancouver.
Dara’s writing style is stunning. It’s beautifully visual, as he describes the scenes surrounding him, which him and his family so often explore.
When describing his family, five of them and their gassy dog Rosie, bless her, he concludes with himself, saying, “me, well I’m the pensive one, always with dirty hands and pockets stuffed with dead things and (sometimes) animal scat.”

It’s apparent that he feels at home in nature, more than anywhere else, as his excitement for it bursts through the pages.
Sad to leave nature behind, at one point he says “With a heavy heart we’re out to sea. There is no giggling, no pointing out the waves. Subdued silence. In Irish this feeling is called uaigneas. It is a deep, deep feeling, a condition of being lonely.”
A few days later, Dara continues his diary, “Even though there are so many good things happening outside in a garden full of song and activity, my mind has settled between melancholy and heart-racing anxiety. I feel trapped in suburbia.”

Dara later describes the scene of a razorbill bird, stunning, the whole scene “mesmerizing and hypnotic,” I found the entirety of this book to be just that. I felt as though I was reading the script of a David Attenborough documentary, except that this time I was part of the set, with a front row seat, enjoying the extreme beauty surrounding me. I had to continually prick myself as a reminder that this was my country, this was where I had grown up.

Dara talks about time that he spent at Portora Royal School, the same school Oscar Wilde attended. McAnulty says “Wilde despised Portora, and I too spent a soul-destroying eighteen months there.” He continues, “For me, every day was agony. I hid it well. The bullies were powerful boys, popular, sporty, and lies dripped off their tongues like diamonds. Dark diamonds. Bloody diamonds. I sit up suddenly, heart thrashing and pounding. I’m glad to be gone from there.”
Bullied for being different, that I can relate to since I share the same experience with Dara. Thankfully for him, he was able to find a way of coping to deal with that, “Wildlife is my refuge,” he says.
Dara states later in his diary, “Find joy in the unknown. Because maybe all of life is unknown, and we are grappling in the dark, and at least I have the comforts that so many do not. I have family. I have warmth. I have so much love.”
When talking about his plans for the future, he expresses that he wants to be a scientist and wants to go to university. “The hoops must be jumped through. Apparently it makes us stronger. Better citizens. I’m not so sure.” I agree with him, that I’m not sure university is always the best, and only way forward. I think there are other, and better ways to learn and slot into the positions we wish to insert ourselves into in life. Experience and practice is better than theory, in my opinion.
It broke my heart when Dara noted in his diary “I’m nobody: I’ve often heard other people say that to me, usually through clasped ears as I crouch on the ground. These words have been resonating for years, and for the first time I’m the one saying them. You’re a nobody… I do what I always do. What I must do. I went back to the dunes of Murlough Bay, with Mum, Lorcan and Blàthnaid, to be with the waves and the seals and the butterflies.”

When starting at his new school after moving house, Dara was filled with anxiety, but “found it miraculous to think that his new school would be at the foot of one of the tallest mountains in Northern Ireland, one of the twelve chieftain mountains on the island of Ireland. I felt embraced by it. Slieve Donard would be with me every day.”
Again, it seemed that Dara sought out refuge in nature, his safe space.
Dara’s personality, which is light, humorous, and intelligent, shines brighter than the sun rising over the Mourne Mountains on a June summer’s day. Diary of a Young Naturalist was an absolute delight to read, the prose evocative and compelling, leaving me with a desire to learn more.
I closed the book not wanting to pack my bags for the Trans Canada Highway, The PCT, or the Appalachian Trail. I finished this one thinking about wandering through the Mourne Mountains one day.
To conclude, this is a fantastic book. One that can be enjoyed by everyone in the family. Whether you like the outdoors or not, I guarantee that Dara will borrow your heart while you read this lovely book. It’s filled with wisdom, great stories, and most of all, it’s down to earth and has a no frills approach. It’s exactly what I needed after what I’ve been reading lately, the gravitational pull back down to the dirt, where I could ground myself once again and feel the earth on the soles of my feet.
I also learned a lot from this book. The names of parks around Northern Ireland, very close to where I grew up, that I’ve never set foot in. I picked up some knowledge on bird watching, various species, and where they come from. These are things that I never would have voluntarily sought out before picking up this book. I was mostly attracted to it because the author was from the same place as me, but this book brought me so much joy. It brought a smile to my face when I needed it.
I’ve been relying on books throughout this pandemic, and also as a coping tool for my mental illness. I use them as a means of escape, as a way to travel outside of my dark thoughts. Diary of a Young Naturalist took me out of my own head and brought me to a vividly beautiful place, one filled with flourishing green parks filled with beautiful flowers, wildlife, and fresh air. It revived me, and filled me with energy. For that I am grateful.

Dara McAnulty is a naturalist, conservationist, and activist. He's received many awards for his conservation work, and he's written and presented numerous natural history programs for BBC radio and television. Dara is the youngest ever recipient of the Royal Society for the Protection of Birds medal for conservation, and he lives with his family and Rosie the rescue-greyhound at the foot of the Mourne Mountains in Northern Ireland. Diary of a Young Naturalist is his first book.

Diary of a Young Naturalist is available at Indigo. Check GoodReads for a list of additional retailers.