Skip to main content
Labels
Posted by Sean Loughran May 03, 2021

Committed: Dispatches from a Psychiatrist in Training by Adam Stern

Meet Dr. Adam Stern, a Harvard trained psychiatrist with a look on his face that says, "this is more than a job for me, I might actually be interested in helping you." You might not be too familiar with that look when you walk into your psychiatrist's office. Perhaps you're just there for a prescription refill or a review of your medication, or in rare moments, Dr. So and So really is there with your best interests at heart.

Dr. Stern is now a psychiatrist at Beth Israel Deaconess and an Assistant Professor of Psychiatry at the Harvard Medical School. Not only does he have an extensive background, training, and education, but he's somehow also found the time to contribute to Op Ed pieces for The New York Times, The Journal of the American Medical Association (JAMA), and The American Journal of Psychiatry.

Did I mention that Stern also has a family and is releasing his first book this year? I'm wondering if he could write me a script for whatever he's taking. 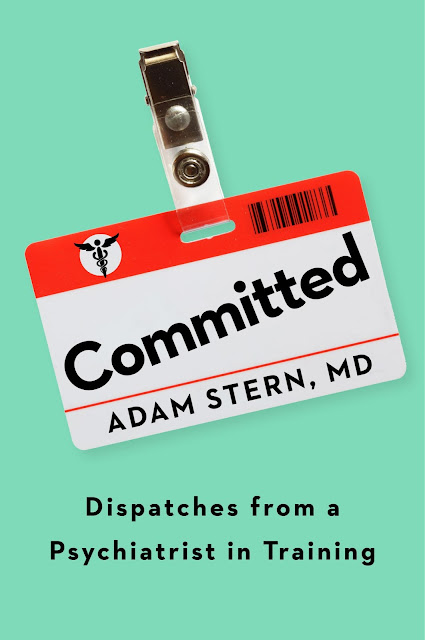 Committed: Dispatches from a Psychiatrist in Training is hitting shelves July 13th and that's what I'm here to talk about. The book follows Dr. Stern as he balances life as a resident psychiatrist at Harvard Longwood while maintaining his social and dating life by a thread.

I have to admit that at first this book caught me off guard, since Dr. Stern spends a lot of time talking about his academic achievements and his medical school experience, almost too much, as though overcompensating for his abilities.

Then later, when entering Harvard's esteemed residency program, he spends a considerable amount of time putting himself down, believing he shouldn't be there, feeling that he lacks the skills and education that his allies have.

When arriving at 4 South, the locked psychiatry unit, for his first night shift as a resident, he's met by a senior colleague who informs him "they can all hurt you. You need your armour on. I like to imagine I'm wearing an invisible hat that has middle fingers all the way around."

Having spent several months in and out of treatment for anorexia and bipolar disorder, I had to close the book at this point and found myself thinking whether my psychiatrist would ever talk about me in such a demoralizing way.

This particular moment felt as though it could have been left out of the book entirely.

Pushing this aside, Dr. Stern's first night, and many nights after, gives the reader a glimpse into life on a psychiatric unit, behind the locked doors. For a new doctor, this can be quite an eye-opening experience. Dr. Stern's words portray the setting exactly as it is though, his prose accurate and succinct.

I felt Dr. Stern becoming more in touch with his patients the more he worked on 4 South, where he was advised by a senior psychiatrist that "Patients are people. We are people. Be a person with patients."

There were various moments where I felt myself becoming resentful though, especially at one point when Dr. Stern and his fellow residents discussed another patient and made a joke about them, which is not appropriate, in any medical setting, and especially not psychiatry. I almost didn't make it to the end, having to stop for the rest of the day after reading that part.

However, I was committed to Dr. Stern's journey at that point, and decided to pick it up and try again.

Even though I found myself let down by this memoir at times, I also found myself drawn to Dr. Stern's story, and everything he had sacrificed to be in his position.

Years in medical school when he probably could have done anything else he wanted. He chose security, risk averse, as he said at one point. He gave up his personal life, friends, a love life, and cashed that in for thirty-hour shifts at the hospital every three days.

Furthermore, he was also caring, compassionate, and connected with his patients. There were times that he went above and beyond for them, showing a deeper level of empathy and understanding, and sometimes choosing to spend more time with them than he would at home.

Through this, I was able to see that the role of a psychiatrist was well suited to him.

To conclude, this book taught me quite a bit about the ins and outs of life on the ward from the perspective of a psychiatrist. I learned a lot about transcranial magnetic stimulation (TMS) and electroconvulsive therapy (ECT) treatments. I've heard great things about both treatments, so it was nice to read about them in a well-written and comprehensive manner, rather than pouring over journals and research studies online.

I was hoping for more of what Dr. Stern would have faced on a day-to-day basis on the ward such as information on the presenting symptoms of his new admissions and how he would have deescalated various situations on 4 South, so I feel as though the book could have done with a little less fluff and a bit more bite.

Committed: Dispatches from a Psychiatrist in Training by Adam Stern, MD will be out July 13th. It's available for pre-order from Indigo and Kobo. For more retailers, check out GoodReads.