A Tale for the Time Being by Ruth Ozeki

A TALE FOR THE TIME BEING

I picked up this beautiful novel at Upstart & Crow on Granville Island in Vancouver a couple of months ago and am finally getting around to reviewing it. There’s so much in this one that I found it hard to whittle it down to a small review without giving away spoilers.

As well as reading the book, I also looked at some online interviews with the author, Ruth Ozeki, and listened to the audiobook. I’m glad I did, especially the audiobook, because it’s told with such tongue in cheek humour, that it really added to the personality of the characters. 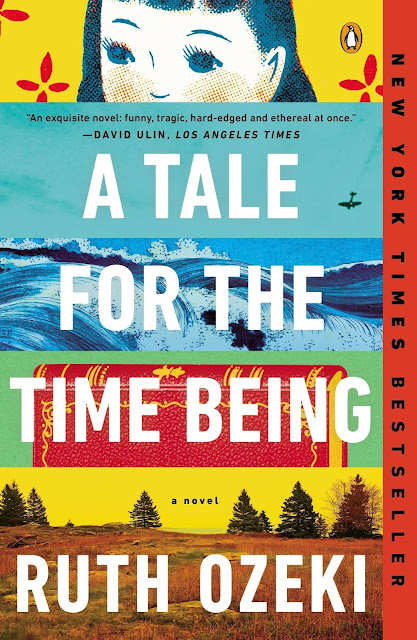 A Tale for the Time Being tells the stories of two girls, Ruth and Nao, and the author moves seamlessly between both narratives throughout the book.
Ruth, a writer, lives in Whaletown on the remote island of Cortes in British Columbia, Canada. One day, she happens to find a lunch box washed up ashore. Inside, she’s surprised to find an old wind-up watch, some letters written in Japanese, and a diary written in English by a 15-year-old girl named Nao from Tokyo.
Curiosity gets the best of Ruth when she finds the diary, and the more she reads, the more invested she becomes in Nao’s story. From the diary, she finds out that Nao used to live in Sunnyvale, California, but was forced to moved back to Tokyo after her father, Haruki lost his job at a technology start up. Because Nao’s considered a foreigner back in Japan, she’s severely bullied by her peers for being a newbie.
In Sunnyvale, Nao’s father was raking in a huge salary, and now, he’s struggling to find a job so the family are forced to live in a tiny, rundown apartment. This leads to him feeling incredibly depressed feeling like a failure, and he even attempts suicide because of it. He doesn’t succeed in the attempt, but it leads to his daughter feeling constantly worried about his wellbeing. Japan is known for its record-breaking suicide rates, so that definitely doesn’t help.
Back in Whaletown, Ruth becomes concerned about Nao. At just 15, it seems to Ruth as though she’s got the weight of the world weighing on her tiny shoulders. This leads Ruth on an endless internet search for the Yasutani family, to see what she can uncover about Nao and her family.

While worrying and feeling anxious about Nao and her family, Ruth starts to have some worries about her own personal life. She’s tried and failed to write a memoir. She used to live in Manhattan, but made the move to the island to be with her husband, Oliver, and since coming here, she’s felt displaced, and unable to write. The memoir has been in the works for ten years, and even though she finds it doesn’t interest her anymore, she feels it would be such a waste of time to give it up now.
Nao writes about a horrific incident of bullying and assault in her diary which leaves her lonely, broken, and…
Ruth, gets to this point in the diary and is shocked to find the last few pages of the diary blank, so she’s left wondering what happened to Nao. Where is she? What has become of her?
What I thought
A Tale for the Time Being leaves us with so many questions, but with one important message, and that is to pay attention to the present rather than getting weighed down by the past. It’s realizing the true happiness of the present moment instead of wanting what we used to have, or wishing for things we could have.
This novel could be quite heavy at times, with themes sexual assault where Nao is concerned and suicide where her and her father is concerned, so those are trigger warnings to watch out for.
Overall though, A Tale for the Time Being is beautiful written and poignant. I was instantly charmed by the curious character of Nao, finding her amusing and quite cheeky at times, especially in the audiobook, when her personality really came across.
The prose was vivid, dreamlike, and a little psychedelic at times.
Ruth Ozeki is a novelist, filmmaker, and Zen Buddhist priest. She is the award-winning author of three novels, My Year of Meats, All Over Creation, and A Tale for the Time Being, which was a finalist for the 2013 Booker Prize. Her nonfiction work includes a memoir, The Face: A Time Code, and the documentary film, Halving the Bones. She is affiliated with the Everyday Zen Foun­dation and teaches creative writing at Smith College, where she is the Grace Jarcho Ross 1933 Professor of Humanities.

“Life is fleeting. Don't waste a single moment of your precious life. Wake up now! And now! And now!” - Ruth Ozeki, A Tale for the Time Being

A Tale for the Time Being is available at Upstart & Crow. They don’t have an online store, so you’ll have to go there in person. Otherwise, it’s available at Indigo and on Kobo. Check GoodReads for a list of other retailers. For the audiobook, I borrowed mine from Vancouver Public Library, and used the OverDrive app to listen.