My Mess is a Bit of a Life by Georgia Pritchett

When I started reading My Mess is a Bit of a Life, I realized how much I related to Georgia and her adventures in anxiety.

Georgia brought me back with her vivid memories in school, reminding me of my early years, where I used to get so anxious in class that I laughed, something referred to as an incongruous emotion, a way to regulate emotions when feeling vulnerable or anxious.

I laughed nervously so much in fact that I was moved to a table at the back of the classroom to sit alone. I still laughed though, anxiously, sitting at my little island, removed from the rest of my peers. 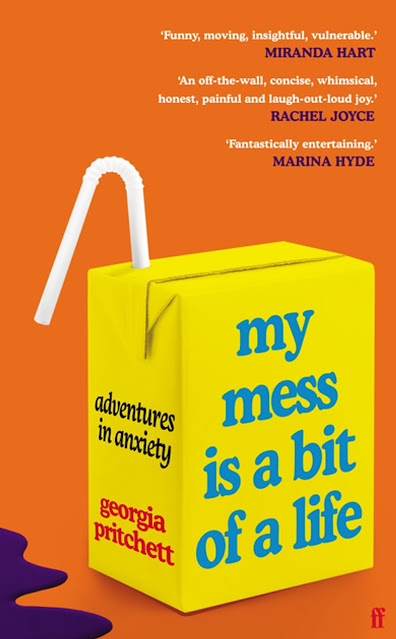 In the book, we follow Georgia through all of her firsts; her first days at school, her first time traveling alone, her first miscarriage, and her first baby.

The story is told in short, and mostly humourous increments, diary style. One adventure highlights a birthday party she attended, which she referred to as a good time, much to her parent's shock, only a good time though because she "had cake and didn't join in any of the games", very much her approach to life.

At times, reading through Georgia's adventures in anxiety, I felt myself thinking holy crap, there's so much in life to think about and here's poor Georgie, carrying the weight of the world on her shoulders. Example being, when she was seven, she'd go to school with 4p for the bus and 5p for emergencies - the bus driver wouldn't take her money, instead he'd give her 2p so she would end up with 11p. She'd either spend the whole 11p on sweets like jelly foam mushrooms or Spangles (yum) or if it'd been a rough morning she'd take off and buy a cigarette!

That reminds me of the times I used to use whatever lunch money I had to buy a single or two from the corner store that sold to kids in uniform. That was until the day I was caught and brought to my mother's office to be reprimanded. My mother, the school nurse, told me not to smoke in my uniform again. And I'm pretty she also gave me a lovely digestive biscuit that she kept in a tin for the diabetic kids.

I love that Georgia refers to writing as "a lifeline, an escape and a reason for getting up in the morning". I've always journaled and have found writing to be one of the greatest forms of therapy. In times of distress, I pull out my journal. And in times of inspiration, I pull out a book or a magazine and think about what or who I want to write about. With writing, the possibilities are endless.
My Mess is a Bit of a Life is joyful and humourous, with Georgia keeping the reader engaged through each and every adventure. I adored her innocence when talking about the first time she tried flirting with a man she liked, "I'll probably go home and do some needlepoint then I'll get such a rush of oestrogen, I'll vomit all over my cross-stitch", which had me laughing so hard that I thought I might vomit all over my kindle.

Today, Georgia's writing credits include successful shows like Veep, Miranda, and Succession. She has won many awards for her writing, and has even been invited to the White House to work on a collaborative project with Julia Louis-Dreyfus, Joe Biden, Michelle and Barack Obama. A woman in a man's world for much of her career, she's delighted that she now gets to share a writing room with women who look like her, dress like her, and share similar life experiences as her.
All in, this was an easy and lighthearted read. Georgia's anxiety was felt throughout every page, however she tells her story lightly and with humour. She removes the heaviness that we anxious people often feel in our chests, and leaves us instead with a giggle.
However, as with any woman in a male dominated field, there are a few touchy subjects, some that refer to the #MeToo movement that completely enraged me. She also discusses some hard hitting topics, but doesn't dive too deeply into them. Even still, I want to wrap my arms around her and give her a big hug.
I would recommend this book to anyone who has suffered with any generalized anxiety or panic disorder, or anyone who just wants a good ole laugh, which is everyone right now considering the world we live in today.
Five stars for Georgia.

February update: Canadian folk! My Mess is a Bit of a Life is finally available for purchase in hardcover from Indigo today!