This little gem of a book has been on my GoodReads want to read list for quite a while now, and I just so happened to be strolling past a little free library in Vancouver and found a copy! I'd hit the jackpot it seemed. 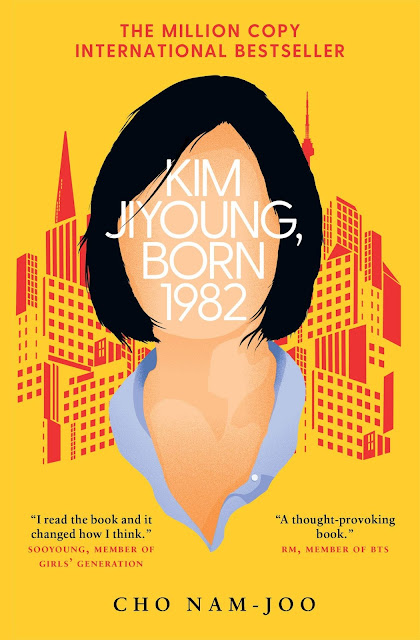 Set in Seoul, between the years 1982 and 2016, Kim Jiyoung, Born 1982 follows one woman's psychological deterioration in the face of the ingrained prejudices against women in Korea. It took me on an emotional journey and gave me an honest look at life in the South East in the face of rigid misogyny.

Author Cho Nam-Joo highlights the priorities given to males over females within the household, and the preferential and special treatments men receive in their professions. While females in the family are considered second rate and males are the prized possessions of the family.

The book discusses the legal population guidelines and birth control policies that went on throughout the 1980s and 90s.

While it's not mentioned, these policies were so extreme that sex-selective abortion was common practice in Korea in the mid 1980s to early 1990s, where selective female abortions were commonplace as male children were preferred.

It was a time in Korea when the family’s wealth was dependent upon the success of the male, with society believing it was up to him to bring honor and prosperity to the family.

I found myself drawn into the protagonist's story, often feeling sorry for her, especially as her father faulted her for not being cautious enough, not being ‘ladylike’ enough, and not avoiding dangerous situations when she was being harassed by the men around her.

The book highlights the 2001 formation of the Ministry of Gender Equality and Family. The organization's objective is the improvement of women's status through the enhancement of women's rights, and the prevention of violence against women and children.

I liked that Jiyoung’s Mother seems to live vicariously through her, fighting in her corner, doing for her the things she only dreams she could have done when she was younger. The underlying theme in this book is that Mother wears the pants, is in charge, and makes the smart decisions, the ones that better the future of the family. And the father places his trust in her because although he won't admit it, he knows she is right.

The book also touches lightly on the cosmetic surgery culture in Korea, with a man telling Jiyoung “you have a nice jawline and attractive nose - just get your eyelids done and you’re golden.”

Koreans feel an immense pressure to be beautiful, and feel discriminated against when looking a certain way. It's actually the norm for parents to gift their children some form of surgery when they graduate college or when they become adults. It's no wonder that Korea is often referred to as the cosmetic surgery capital of the world.

If you want to know more about the pressures to be beautiful in this country, I recommend reading If I Had Your Face by Francis Cha.

Last but certainly not least, the book highlights the Gender Wage Gap in Korea. Bloomberg reported in 2020 that South Korean woman took home 32.5% less income than men last year - the widest pay gap among 37 members in the Organization for Economic Co-operation and Development.

Why do we value the work of men over women? This is an ongoing and pressing issue, not only in South Korea, not only in Asian countries, but worldwide.

Overall this book was captivating and is a must-read.