Here for It by R. Eric Thomas

Born with a fabulous sense of humour, a brilliant talent for writing, and with a smile that shines as bright as the sun, introducing R. Eric Thomas.

Once I started this audiobook, I was committed. I really was Here For It. Listening to Eric's upbeat narration was music to my ears on my daily dog walks. Over the course of a few days, hearing his voice, I observed my confidence increasing as I moved with more intention and purpose. 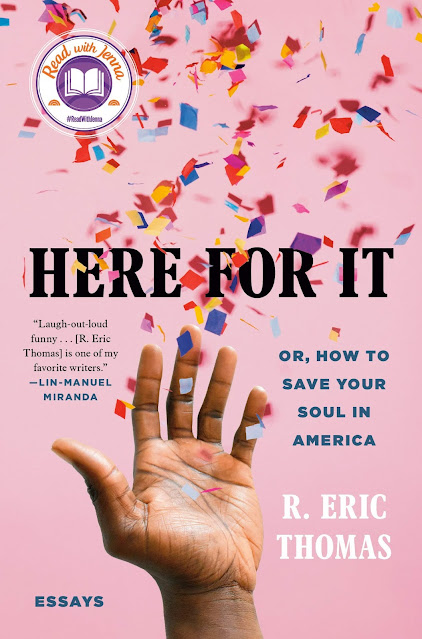 Before discovering Here For It, I didn't know who this beautiful soul was. I just happened to be browsing through the Read With Jenna book club selects and stumbled upon a cheerful cover that I felt I needed in my life right at that moment.
Turns out, Eric is pretty famous, and pretty funny, too. He's been heard on The Moth Radio Hour, NPR's It's Been a Minute with Sam Sanders, All Things Considered, and Pop Culture Happy Hour, as well as a number of other podcasts.
For four years, Eric was also a Senior Staff writer at ELLE.com, where he wrote "Eric Reads the News", a daily current events and culture column. His work has appeared in The New York Times, Time, W Mag, O the Oprah Magazine, and many other publications.
He's pretty damn accomplished.

At the beginning of Here For It, Eric talks about his childhood, where he was "black in a white environment, gay in a straight environment, never quite right. An other"
He often found himself retreating to the library, where he found solace in books, his saving grace. His passion for books shines bright throughout the entire book. He says "a library looks like endless possibilities in this way. A library is a universe of smaller universes contained within pages… Every story is an invitation to imagination."
I enjoyed hearing the excitement in his voice when he talks about the library and his time working there.
There are moments of vulnerability that struck a cord with me, especially when Eric talks about hiding his gayness. He brings some humour to it, but it can't have been easy. For him, he was one of the few Black gay kids at school, which must have been tough.
Eric started to come to terms with it, though, the library again providing comfort, and a place where he felt safe to even begin to start exploring the word gay.

Another part of this book that I really enjoyed was Eric's humanness, and his ability to connect with readers. He admits that sometimes he doesn't know what he's doing or why he's doing it, but that he tries it anyway. I think that's something most of us can relate to. I certainly can.
There was a step before finding his true love and current husband, and that step was online dating, which went a little like this.
What's the most private thing you are willing to admit here? "I'm getting pretty serious about getting on The New York Times Weddings & Celebrations page"
Response: Massively unpopular…
Spoiler: His husband David and him did in fact end up on those pages the day they got married. And I am so delighted to hear that.

All in, I found Eric's story relatable in many ways, hilarious and uplifting, and down to earth. I enjoyed the audiobook and I think you might too.

Here For It: Or, How To Save Your Soul in America: Essays is available at Indigo or you can check Penguin Random House Canada for additional purchasing options.