Everything Is Fine by Vince Granata

Everything Is Fine, which I read in under 24 hours, tells the story of Tim Granata, who was 22 years old when he fatally beat his mother at their home in Orange, Connecticut in 2014. The story is told from the perspective of Tim's brother, Vince.

For Vince to recount the violent death of his mother at the hands of his schizophrenic brother, Tim, is a tremendously painful thing for anyone to imagine.

Through his powerful words, I kept thinking of my own mother. The same age as Vince's was when she was found dead on the floor of their family room, discovered by Vince's father and sister.

"Tim killed Mom", his father said to him over the phone. That's how Vince found out, one thousand miles from home at the time on a teaching exchange.

When he heard those 3 words, his life was changed forever. 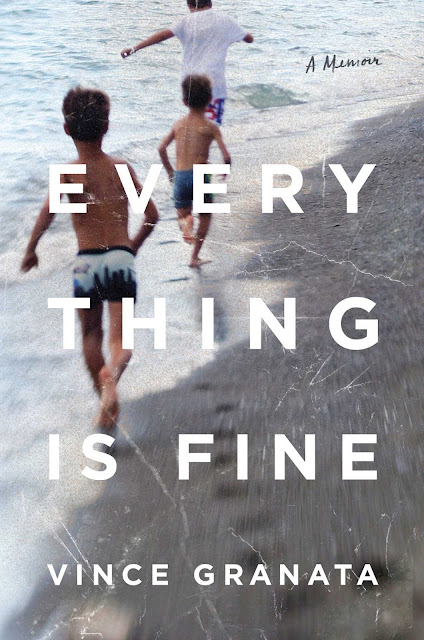 It's clear throughout this book that Vince wants the reader to see Tim, as Tim, and not like some kind of monster, as perhaps someone on the outside may automatically judge him to be.

How we judge those with mental illness after they have done something out of societal norms really got me thinking.

We typically soothe those with mental illnesses by telling them it's not their choice or something they can control. We can make a choice to separate them from their illness, see them as a human, and see their illness as a separate entity.

But once that person does something that is out of bounds or off limits, then their illness suddenly becomes attached to them, what they have done becomes a choice they have voluntarily made, and they are punished for it. We then dehumanize those who commit crimes, and suddenly they are criminals. Granata does a great job of explaining this in the book.

He also does a good job of explaining schizophrenia as a whole to the reader (the delusions, hallucinations, psychosis etc.). Vince talks about the prodome in schizophrenia, a period that an individual may experience some symptoms and some changes in functioning impending the onset of the actual disorder itself.

Everything Is Fine chronicles the story from before Tim's illness, the murder of his mother, his trial, and the family's coming to terms with what has happened as Vince educates himself extensively on schizophrenia and severe and persistent mental illnesses.

He meets with various experts in the field including Dr. Torrey (author of Surviving Schizophrenia). Vince also discusses anosognosia (lack of ability to accept one's illness), and the 'revolving door phenomenon' present in many psychiatric units.

One thing is clear: the need for more resources and more mental health education. Schizophrenia is still largely misunderstood. And as Granata states "schizophrenia contains multitudes, yet we gather so many experiences under this single heading. One disease. Many divergent paths."

My hope with this book is that it brings more awareness and knowledge of schizophrenia and mental illness to an uneducated population. Stigma and judgement exist because we as a whole are uneducated.

Everything Is Fine will be available at booksellers on April 27th.