I'm writing this review while hunched over my first Korean food in seven years. I'm eating a vegetable kimchi pancake and a bowl of steamed rice from Sura in Vancouver, taking in Michelle’s beautiful prose through my taste buds. The first time (and last time) I had Korean food was 9 years ago, in the intern quarters at NY Fashion Week, when I ate kimchi from a styrofoam carton that had been left in an overheated room for several hours. It put me off forever, I thought. Until now.

Crying in H Mart is Michelle's love letter to her mother, one she never got to tell while her mother was alive. It’s also a food memoir, thoughts revived at H Mart, the supermarket where Michelle vividly remembers all the foods her mother bought and cooked for her. A story about food, love, and the connection between the two.

While reading, I experienced emotions that I didn’t know still existed inside me, feelings of sadness so deep within, from the death of my granda. This book brought those to the surface, and while Michelle was grieving for her mother, I was grieving for my granda alongside her. While I don't cry for him at H Mart, I cry for him when I think of Asda, where I took him. I see his eyes catch mine when we pass by the chocolate biscuits, or I hear his voice telling me to make sure I have everything I need. These trips were for him, yet he treated them as though they were for me. I still sense him there, his cart moving through the aisles, his smile catching the attention of those around him.

This book was hard, emotionally exhausting, but it was also beautiful, and I wanted to continue, because with every chapter I read I was able to conjure up more images of him. I felt like it was bringing him to life again.

Reading of the meals Michelle shared with her mother, I kept thinking of those I had with my granda. I had a craving for orange marmalade on toast with a cup of piping hot breakfast tea. I wanted to taste what he tasted every day, wanted to sit down at my dining table and imagine him sitting across from me, reading the morning newspaper. I would have just woken up. He'd have been up for a few hours already, been down to the petrol station, would've likely stopped into the shop for a fresh apple pie. 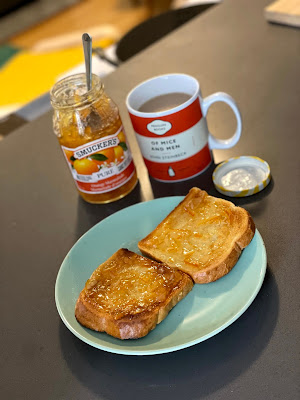 Our second breakfast, the two of us cutting ourselves generous slices moments after breakfast.

But before either of us had our breakfast, before he even took a bite of his, he would make sure my granny was settled. He'd whiz her breakfast up to her on her mobility chair. He would follow on foot, serving her breakfast in bed on a platter, everything she needed. That was him. A gentleman.

For Michelle and her mother, love wasn't expressed through physical affection or emotional feelings, it was communicated through food. Her mother's love was tougher than tough love.

However, even though love seemed tough at times, Michelle's mother, deep down, only wanted the best for her. One time, after her parents vacationed in Mexico, they gifted her a pair of cowboy boots. When she put them on, she noticed they'd already been broken in. Her mother had worn them around the house for a week, smoothing the hard edges in two pairs of socks for an hour every day, breaking in the tough leather to spare her all the discomfort.

As Michelle grew older, developing from an angsty and disruptive teenager into a young woman in her 20s, her bond with her mother grew stronger. They talked more openly, shared more meals.
Michelle's mom met her new boyfriend Peter, and liked him instantly, stating that he "eats like a Korean". The day after meeting him, Chongmi decided to book a Korean spa for Michelle, Peter, herself and her husband. Bear in mind, clients of Korean spas are required to be entirely nude for the time they spend there and are split up by gender. No better chance of getting to know a potential father-in-law than spending the day naked beside each other at a Korean day spa.
The diagnosis of her mother's cancer fell on her like an anvil. After a long and torturous battle with the disease, Michelle's mother, Chongmi, passed away in 2014.
After the death, Michelle talks about the burial, wanting to bury her mother in the ground, so she could have a place to fall against the earth, collapse on the ground, weep into the grass.
My granda is buried in Northern Ireland, so I haven't been able to visit his grave, but for me, he's all around me. He's in my dreams, in the decisions I make, he's with me when I'm lost and lonely, when I'm depressed and desperate. He's right here. I may no longer feel his physical embrace, but I feel his loving presence surrounding me.
Michelle went on to find success as a musician, under an alias, Japanese Breakfast. She has since released two studio albums, and has a third on the way. The first of which, Psychopomp, features an image of her mother on the cover.
I don't know how I would have felt knowing about any diagnosis or underlying ailment with my grandfather. He had a perfect mind, perfect health as far as I was concerned. Went into the hospital one day and never came out. The landline phone rang in the middle of the night one evening and that was it. He was gone.
I paced the walkways of the hospital mindlessly back and forth unable to bear the thought that I wouldn't see him again. Wouldn't be embraced by him, feeling his woollen cardigan rub against my cheek. I wouldn't hear him speak again. I wanted to hear his voice. When he came to our home for the wake, I cried for two days straight. I wrapped my arms around my mum and told her that "my hero was gone". The only comfort I had then was his dressing gown, I would wear it every day. It smelled like him, I didn't ever want to wash it, I just wanted to get into bed, ignore everyone in my house, burrow under the covers and wrap myself up in him.
He was in his 90s when I lost him, but I still imagine him here by my side. I often wonder what he would think of me now, picking up the phone and calling him from Vancouver while he brews a tea for my granny in Belfast. The two of them sitting in their scorching hot apartment, the one I used to nap my worries in away at after school. I'd wake to the smell of whatever my granda was making in the kitchen mixed with the scent of my granny's hairspray and cosmetics fuming out of her dresser.
Always dressed to impress, she was. Never a hair out of place.
My latest apartment has a beautiful view, aside from the billboard that obstructs part of the mountain. I can see that billboard from every window. The advertisement on there when we moved in was for sardines. My granda used to enjoy sardines on toast sometimes, and it reminded me of him. They just changed it to an ad for Tropicana, another of his favourites. A reminder that he's still here watching over me, every day.
After both my grandad and my grandmother died, I found a letter in her purse that she carried with her every day, one from him to her when he was in South Africa for work, waiting for her to join him there. I pull it out of my drawer sometimes to remind me of the love they had for one another.
"Well, darling, I'll be with you in my thoughts so take good care of yourself. I hope your voyage is pleasant. All my love, Heary"
All in all, I found this book truly heartwarming and heartbreaking at the same time. The love Michelle felt for her mother felt the same as that I felt for my grandad. As she experienced grief, I experienced emotions and feelings that I had long since buried, having not yet faced them before opening this book. I didn't expect to, but I cried many times throughout, beautiful happy tears, while memories were brought to life, triggered by the words in this memoir. For that, I am grateful.

Crying in H Mart is available at Indigo or on Kobo. For a list of all other retailers, check out GoodReads.