The Dressmakers of Auschwitz by Lucy Adlington

The True Story of the Women Who Sewed to Survive

“The Nazis were well aware of the power of clothing to shape social identity and to emphasize power. They were also significantly interested in the wealth of the European textile industry, an industry dominated by Jewish capital and Jewish talent.”

THE DRESSMAKERS OF AUSCHWITZ

At the height of the Holocaust twenty-five young inmates of the infamous Auschwitz-Birkenau concentration camp—mainly Jewish women and girls—were selected to design, cut, and sew beautiful fashions for elite Nazi women in a dedicated salon. It was work that they hoped would spare them from the gas chambers.

This fashion workshop—called the Upper Tailoring Studio—was established by Hedwig Höss, the camp commandant’s wife, and patronized by the wives of SS guards and officers. Here, the dressmakers produced high-quality garments for SS social functions in Auschwitz, and for ladies from Nazi Berlin’s upper crust.

Drawing on diverse sources—including interviews with the last surviving seamstress—The Dressmakers of Auschwitz follows the fates of these brave women. Their bonds of family and friendship not only helped them endure persecution, but also to play their part in camp resistance. Weaving the dressmakers’ remarkable experiences within the context of Nazi policies for plunder and exploitation, historian Lucy Adlington exposes the greed, cruelty, and hypocrisy of the Third Reich and offers a fresh look at a little-known chapter of World War II and the Holocaust. 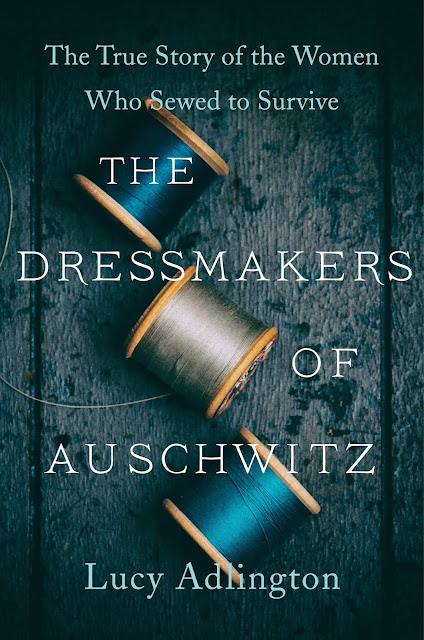 Deeply thought-provoking and profoundly moving, The Dressmakers of Auschwitz was a heavy read, but an important one. Lucy Adlington did a phenomenal job at unveiling another part of history that was unknown to the world before the publishing of this book.

This was my first nonfiction book on WWII, and it took my breath away. I’ve read a lot of historical fiction, which is inspired by true events, but I’ve never read anything quite like this before.

The book is filled with images from fashion magazines and catalogues showing the styles of the times. There’s also a rare selection of photos of the women from the Upper Tailoring Studio, both pre and postwar.

It was interesting to read about dressmaker's lives after the war; where they ended up and who they married. Unfortunately, not all of them made it to safety after Auschwitz, but those who did, like Marta, Irene, Hunya, and others, went on to use their sewing skills throughout the rest of their lives.

As Adlington would say, needles in, needles out, life went on for these women. However, what's clear is that the tragedies they witnessed at the camp will stay with them forever.

All in all, the writing is incredibly strong and the research is thorough in this book. The Dressmakers of Auschwitz is an insightful and powerful book. I highly recommend it.

Lucy Adlington is a British novelist and clothes historian with more than twenty years’ experience researching social history and writing fiction and nonfiction. She lives in Yorkshire, UK.

The Dressmakers of Auschwitz is available for purchase in paperback at Indigo or in e-book format on Kobo. Check GoodReads for additional retailers.