The Way She Feels by Courtney Cook

My Life on the Borderline in Pictures and Pieces

"Still, it's hard for me to remember a time when I felt truly, unmistakably happy. My memories are clouded with anxiety, recalled through a lens of fear. Though I was a child with everything I could dream of and more, I felt a gaping hole inside me that nothing tangible could fill."

THE WAY SHE FEELS

What does it feel like to fall in love too hard and too fast, to hate yourself in equal and opposite measure? To live in such fear of rejection that you drive friends and lovers away? Meet Courtney, she has borderline personality disorder (BPD), along with over four million other people in the United States. Though she's shown every classic symptom of the disorder since childhood, she wasn’t properly diagnosed until nearly a decade later, because the prevailing theory is that most people simply “grow out of it.”
In her illustrated memoir, The Way She Feels: My Life on the Borderline in Pictures and Pieces, she shares what it’s been like to live and love with this disorder. Not just the hospitalizations, treatments, and residential therapy, but the moments she's found comfort in cereal, the color pink, or mini corndogs; the days she couldn’t style my hair because she thought the blow-dryer was going to hurt her; the peace she found when someone she loves held her.
This is a book about vulnerability, honesty, acceptance, and how to speak openly—not only with doctors, co-patients, friends, family, or partners, but also with ourselves. 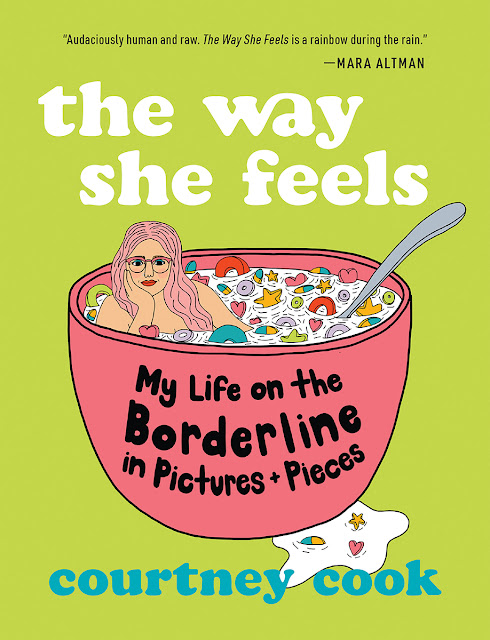 What I thought
I felt compelled to read this book since I was once misdiagnosed with borderline personality disorder. I lived with that diagnosis for six months before being receiving the correct diagnosis of bipolar disorder. During the time my mental health treatment team thought I was borderline, I spent a lot of time researching and reading the limited number of books and memoirs about it. What I realized was just how little has been written on the subject, and whatever material I read on the internet left me feeling entirely hopeless about any possibility of treatment or recovery.
This book was a hard read for a number of reasons. There's heavy talk of self harm, suicide, and hospitalizations, which may be triggering to some. I found the self harm sections to be particularly triggering, so had to skip past some of that. It was also hard because it was so deeply relatable at times, and I really felt Courtney's pain so strongly through her original illustrations and brutally honest prose. I felt like she was saying what I'm sometimes thinking but am too scared to say myself.
Courtney and I were both diagnosed with major depressive disorder and generalized anxiety disorder at a young age. We both rely heavily on medication and the use of dialectical behaviour therapy skills for distress tolerance and coping with the obstacles our illnesses throw at us.
It was refreshing to read about Courtney's growing up in Winnetka, Chicago, and despite seeming to have it all, she says, "the one thing I don't have, however, is my mind. My mind is both mine and a stranger's, something I understand intimately and don't understand at all."
The Way She Feels broke my heart at times. I think Courtney showed so much strength and courage in this book, sharing her story uniquely, with such vulnerability. This seems to be Courtney at her rawest, with no holding back.
She states at one point, “I am always afraid to share that I have borderline; I wonder if I ever won’t be. But when I was diagnosed, I made a promise to myself and the BPD community that I’d try to diminish some of the stigma surrounding my, our, diagnosis,” she continues, “That in order to be an advocate, I’d have to be vulnerable.”
As I mentioned, there's a severe lack of literature on borderline personality disorder, and stories of survivors with this illness. I say survivors, because anyone with this diagnosis is a survivor. Just getting through the day with this diagnosis is surviving.
I'm so glad I had the chance to read Courtney's story, which in itself is so special. It felt like a gift to be allowed unrestricted access to her brain, thoughts, emotions, and feelings, while reading this book. To read about the good things, and also the bad, because I found a lot of them to be relatable.
I recommend this for anyone who does have a BPD diagnosis, or anyone with a desire to find out more about the illness. Be warned that there is material that could be triggering though, so please make sure you have the correct supports in place should you feel triggered.
All in all, Courtney has a lovely and imaginative way with words, and she's an incredibly gifted illustrator.
Courtney Cook is a writer, illustrator, teacher, and lover of naps. Courtney received an undergraduate degree from the University of Michigan and an MFA in creative nonfiction from the University of California, Riverside. She grew up in Winnetka, Illinois, and now resides in Chicago with her cat, Bertie.

The Way She Feels: My Life on the Borderline in Pictures and Pieces is available for purchase in paperback format from Indigo and in e-book format from Kobo. Check GoodReads for additional retailers.

Thank you Tin House for the copy of this book in exchange for an honest review.