“Well, you obviously don't love anyone very much if your love is contingent on them always staying the same.”

Isma is free. After years of watching out for her younger siblings in the wake of their mother’s death, she’s accepted an invitation from a mentor in America that allows her to resume a dream long deferred. But she can’t stop worrying about Aneeka, her beautiful, headstrong sister back in London, or their brother, Parvaiz, who’s disappeared in pursuit of his own dream, to prove himself to the dark legacy of the jihadist father he never knew. When he resurfaces half a globe away, Isma’s worst fears are confirmed. 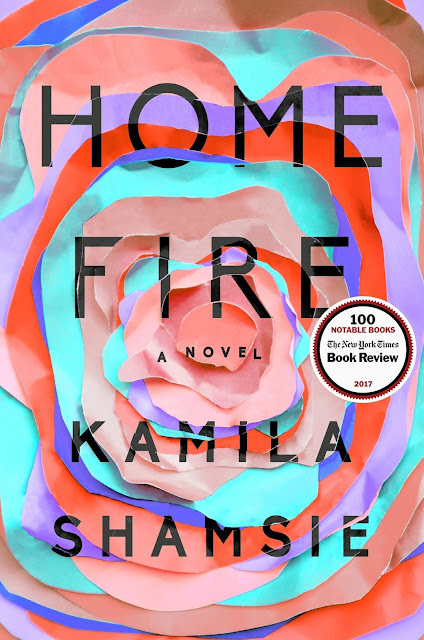 What I thought
Home Fire opens up with the main protagonist, a twenty eight-year-old Muslim named Isma. She’s at Heathrow Airport, and despite her British citizenship, she’s singled out for wearing a hajib. Immediately, we’re reminded of all the racism in this world, as Isma is interrogated at length, for almost two hours, and in so much detail that she misses her flight, without so much as an apology.
She’s asked, “Do you consider yourself British?” And further interrogated on her thoughts on Shias, homosexuals, the Queen, democracy, and even The Great British Bake Off.
Having been at Heathrow so many times, and encountered questioning as a white male, I can’t even imagine what it would feel like for Isma to be singled out and questioned as a female Muslim in a hijab.
She has just as much right as everyone else to go to America with her approved student visa, where she’ll pursue a PhD in sociology. Isma remains calm throughout this entire encounter.
What else is there to do in that situation? I thought to myself.
Then Eamonn enters the sisters’ lives. He meets and befriends Isma at a coffee shop in Amherst, where she’s living at the time. He’s the son of a powerful political figure, with his own birthright to live up to—or defy. “You are, we are British. Britain accepts this. So do most of you. But for those who are in some doubt about it, let me say this: Don’t set yourself apart in the way you dress, the way you think, the outdated codes of behaviour you cling to, the ideologies to which you attach your loyalties. Because if you do, you will be treated differently —”

Home Fire took some time to get into initially, but it got there in the end, and really started to gather speed in the middle. It’s extremely well written, and the story line is exceptional. Home Fire won the 2018 Women’s Prize for Fiction and was Long Listed for the Man Booker Prize 2017. It’s also one of the 100 Notable Books from the New York Times Book Reviews from 2017.
There are five main characters within the book, Isma, Eamonn, Aneeka, Parvaiz, and Karamat, and I feel like the reader gets the full perspective from all of them, which is an entirely different viewpoint from each.
I listened to the audiobook, along with the physical book, which I borrowed from Vancouver Public Library. I think the narrator’s voice mostly fit with the characters in the book. I say mostly because I think it could have done with some improvement to bring life to Kamila Shamsie’s beautiful words. The narration impacted my reading experience positively in that I was able to take breaks from following the physical book to crochet when I was founding it difficult to follow the storyline, which helped me to refocus.
All in all, I liked this book, however at times found it difficult to follow the storyline. I had no expectations going into it, though, and didn’t know what to expect aside from what I had read on the back which was alluring enough for me to purchase it. As promised on the back, it was tragic, devastating, and intensely intimate. It was also deeply thoughtful, layered, and emotionally charged. 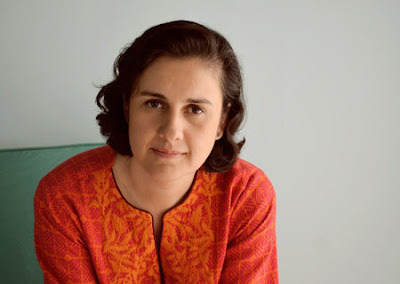 Kamila Shamsie was born in 1973 in Karachi, where she grew up. She has a BA in Creative Writing from Hamilton College in Clinton, NY and an MFA from the University of Massachusetts, Amherst. Her books have been translated into a number of languages.
A reviewer and columnist, primarily for the Guardian, Shamsie has been a judge for several literary awards including The Orange Award for New Writing and The Guardian First Book Award. She also sits on the advisory board of the Index on Censorship.
For years Shamsie spent equal amounts of time in London and Karachi, while also occasionally teaching creative writing at Hamilton College in New York State. She now lives primarily in London.

Home Fire is available to buy at Indigo and on Kobo. Check Penguin Random House CA for additional retailers.