The Last Bookshop in London by Madeline Martin

“All human wisdom is contained in these two words - Wait and Hope” — Alexandre Dumas, The Count of Monte Cristo

Inspired by the true World War II history of the few bookshops to survive the Blitz, The Last Bookshop in London is a timeless story of wartime loss, love and the enduring power of literature.

The book starts out in London in August 1939, on the eve of the war. We meet Grace Bennett and her friend Viv, the two travelling via train on their way to England’s capital. While she’s so filled with nerves, she’s vibrating, Viv’s displaying a different set of emotions as she paints on a fresh coat of lippy and gives a gorgeous vermilion smile. 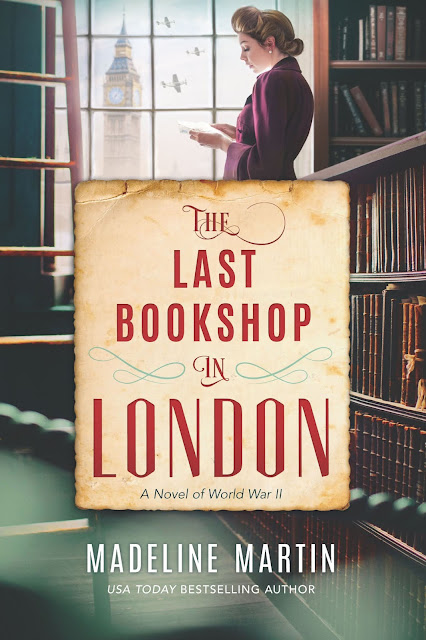 Already I have this image of Grace, with her pretty grey eyes and the perfect curls dangling from her fair hair, accompanied by her boisterous friend Viv on the train pulling up to Farringdon Station.
It had always been Grace’s dream to move to London, to leave their current, slow-moving, familiar existence and exchange it for life in London’s bustling and fast-paced metropolis.
A dream is usually something you work towards, though, not something that someday becomes a necessity. A dream is not something that you do because you have to.
And of all the times to go to London. They had to go now?
“The war really is coming, isn’t it?” Viv said softly.
Indeed, it was.
At 11:15am on Sunday, September 3rd, Prime Minister Chamberlain’s voice filled the radio waves and announced that Britain was at war with Germany.

Martin has an incredible way with words, and knows how to invoke emotions and connect with readers. Her prose is enchanting and heartwarming, The Last Bookshop in London captivated me from the moment I opened its pages. Everything is described with such thorough detail I felt at times as though I had stepped into the scenes myself.
The character’s personalities are so unique and apparent, each one resonating with me differently. I found myself taking a particular liking to Viv, her tenacity and strength, “We’ll make it through this, Grace Bennett. Just you see.”
I had this image of her in my mind that I couldn’t quite shake. Viv, that one friend that we all have, the one that’s been with us and grasped our hands tightly through the pandemic, and told us, “it’ll be ok, we’ll get through this.”
When Tabby the cat made his entrance, I smiled to myself. Through following Madeline on social media and reading her bio, I know how much she adores kitties, so seeing her own personality come through in her writing was another reason I adored this book so much. It’s a joy to feel an author’s persona through their work, allowing the reader the opportunity to feel more connected to the writer.

Around the middle of the book, Grace finds solace in reading, and the way that Madeline describes the scene resonated so much with how I feel about books and reading. I found myself in the same spot as Grace, curled up with the torch from my iPhone shining onto the pages of The Last Bookshop in London, while the rest of my house lay asleep. This one kept me up into the wee hours of the night. Just like Grace, after every chapter, I swore it would be the last, but I just kept going.
Sometimes there can be a lull in the middle of a book, but this one really picked up speed halfway through, quite like a rollercoaster, as the war got underway, and the adrenaline got pumping through the main protagonists. This kept for a thrilling and engaging story from start to finish.
There’s a sign at the Primrose Hill Bookshop where Grace finds herself working, it says, “where readers find love,” I feel as though that sign could have been placed on the cover of this novel, because I found love within its pages.
I would recommend this book to lovers of historical fiction, as well as anyone looking for a beautiful gift.

Madeline Martin is a New York Times bestselling author of historical romance novels filled with twists and turns, adventure, steamy romance, empowered heroines and the men who are strong enough to love them. She lives in Jacksonville, Florida, with her husband, and two daughters.

I bought my copy of The Last Bookshop in London at Black Bond Books in Vancouver. Check HarperCollins or GoodReads for a list of other retailers.