“You have to be one with yourself to be confident, and trust in yourself, because basically what you have to do is not give a fuck what other people think about you, and not pay attention to what everybody else is saying.” - Action Bronson

The powerhouse behind Viceland TV series F*ck, That’s Delicious, Action Bronson has a new book on the shelves.
F*ck It, I’ll Start Tomorrow: A True Story is a brutally honest chronicle about Action’s struggles with his weight, food addiction, and his journey to accepting himself for who he is. In his signature voice, known for its filth and humour, Bronson shares all that he’s learned over the past ten years to help readers help themselves. 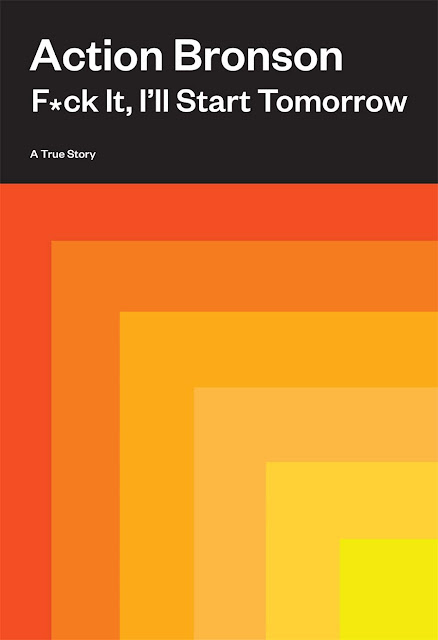 This isn’t just another diet book misleading you to another so-called perfect body. We all know those are bullshit, anyway. Instead, Action’s newest book aims to help others find confidence, chuck out the negative vibes (along with the mirror), and stay sane while doing so. His goal is for the reader to see themselves for whom they really are.
F*ck It, I’ll Start Tomorrow is not about losing weight, there’s enough diet culture books contaminating the market. This book is about being, and feeling excellent, regardless of your size or shape, and it’s about living f*cking healthy, period.
And you know what, I F*CKING LOVED IT.
The book starts out “I’ve always had sick confidence. I’ve always felt like I was six-foot-two and shredded, like I could literally do anything. Like I could field a baseball with a gazelle-like skill. Like I could run the forty-yard dash faster than any human on earth. Like I could score a touchdown at anytime and smash a baseball into outer space… But in reality, I am not six-two. I am five-eight with stilts on, and not wearing roller skates. And I’ve been around two forty, two hundred seventy pounds for most of my life.”
That’s confidence. Where did it come from though?
In a chapter called New York Made Me, Action talks about the characters in the Flushing neighbourhood where he grew up and how they gave him confidence, stating, “everyone in my neighborhood was a character. We only knew crazy people and crazy stories.”

Living in the city itself gave him confidence, “New York is just a hard city,” he says, “You don’t make it instantly here. No one is just accepted - you have to fucking show that you’re able to roll. When I was growing up in Queens, everyone made fun of each other, and you couldn’t have fucking thin skin about any of that shit.”
He attributes another reason for being where he is and his force of confidence to his mother, stating that she never cared what people thought, “She gave no fucks. My mom did all kinds of weird shit, and still does.” It’s clear from the book that Action shares a close and unbreakable bond with his mother, referring to her as his “ride or die” at one point. They’d spend a lot of time together, exploring restaurants all over the city, eating at all the good places in Chinatown, her exposing Action to all the good shit. He attributes his mom for giving him a spirituality and a love of just exploring the city.
New York Made Me is the first time Action mentions his struggles with food, when talking about people coming around the handball court with icees, either that or the ice cream truck would show up. When thinking about whether he preferred one over the other? “Depends on what time the motherf*cker came when I was wanting it - I don’t have drug dealer preferences. If one guy has what I need, I might take that, and when the other guy calls back, I’ll take that, too.”
It’s obvious from reading about Action’s upbringing that food was aplenty. With lots of family gatherings, and an Italian and Armenian family, there was never a shortage of nourishment, and he talks about it with such passion.

And food seems to be a big passion for Action, who prefers sweet to savoury, saying “Now that you’ve had your meal, you need your dessert. Sometimes you will just pick at the meal to get to the dessert.” He continues, “ice cream especially goes down really smooth, like a fine tequila.” Action and I share that same passion for dessert. I’m always thinking about what I’ll have for dessert before I even order the main.

In a chapter titled The Steroid Years, Action wonders “Why the hell aren’t we the same?” when he starts becoming obsessed and comparing himself to other people and bodybuilders, creating this vision of what he thought he should look like. He became obsessed with the mirror during this time, seeing things, “it’s like a mirage,” he says. Eventually, he had to stop, “I was an emotional wreck.”
He talks about the bullshit of modern day diet culture, specifically the Atkins diet. He did it for 3 weeks once, losing 40 lbs, keeping it off for a week, then saying, “It comes right back because it’s fake weight loss. You eat one piece of bread, and it’s over, it’s a wrap.”

He admits that it’s been a long time since he’s been on an actual diet, but that he’s always dieting in his mind. For him, it’s always “Fuck it, I’ll start tomorrow. But, you know, tomorrow never comes.”
What I thought
The gospel according to Action Bronson. That’s exactly what I thought after reading this book. Because I took every bit of advice and I inhaled it. I didn’t expect to, I was surprised that I did. I’ll be honest with you. I judged Action by his online presence and social media before reading this, and then I picked up the book, and it changed my entire perception of him. It changed this image of him that I had constructed in my psyche.
This guy is the real deal, I thought. He’s an open book. He actually gives a shit. He has a lot of wisdom to share, and I’m glad he’s sharing it. F*ck It, I’ll Start Tomorrow is BURSTING with advice, honesty, and humour.
This book needs to be front and centre in the Food & Diet section of bookstores where it can set fire to all the other diet culture books. It has the power to do that.
A short read at only 184 pages. It’s short, but impressive. Recommended for those who struggle with weight and body images, disordered eating and eating disorders. This removed the seriousness associated with my anorexia that I typically read about in memoirs and essays, and allowed me to kick off my shoes, sit the heck back, chill out, and laugh. “I’ve been told I’m a deflector of negative energies of others,” he says. And it’s true, from what I can tell.
Action Bronson has a way with words. He commands attention through his prose, and he leaves a lasting impression.
When I started reading this book I found myself randomly telling people about it, almost as though I was boasting about it. “Hey look what I’m reading?” I said, proud of myself.
Right off the bat I could see why this book was an instant bestseller. I laughed from start to finish. Action talking about his getting arrested, hiding his stash between his butt cheeks “it’s like doing a bicycle kick while you’re driving” and getting his penis pierced just because a girl wanted him to, then she didn’t even show up. It not even the kind of humour I’m used to, it’s pure filth. But I found it hilarious anyway.
Action and I come from different worlds, our backgrounds couldn’t be more different, yet I felt a certain liking toward him, drawn to him through his words and stories.
Action may not ever be aware of it, but with him being a male, with a voice and a following of over 2 million people, speaking openly about his struggles with his weight and food, he will inch the needle forward for males in eating disorder treatment.
To conclude, this was a great anti-diet culture that speaks the truth about how we really feel about out our bodies.

F*ck It, I’ll Start Tomorrow: A True Story is available at Indigo and on Kobo. Check GoodReads for a list of other retailers.