The sun is shining in Vancouver this week with highs of 20°C/68°F... I’d just had one of the most popular blog posts I’d had since starting my blog with my review of Everything Is Fine, which felt great, but I’d also read the post so many times before publishing that I needed a break.

So once I was finished therapy and group yesterday (therapy also included listening to my audiobook, Here For It by R Eric Thomas). Review is coming soon, but sneak peak, I am here for it, down for it, and completely and entirely living for it.,

Anyway, day done, sun shining, Charlie and I decided to head out for a coffee with our dog Tanto.

We followed the sun and ended up at Milano Coffee Roasters on Vancouver's 8th Avenue. I've been to Milan (Italy) for work, and I do not like it probably because I was working as an assistant in the fashion industry and those folks just aren't nice unless you're running around getting them cappuccinos and lighting their cigarettes. 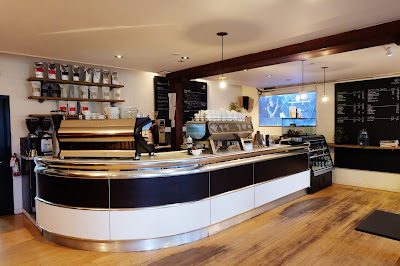 But at Milano...there’s the smell of freshly brewed coffee in the air, baristas are smiling (at least I'll assume they are under their masks), and the baked goods are giving off some lovely vibes too... Lemon bars, cookies, pastries, and a pretty good GF selection, which is important when your BF is celiac, like mine is. I like it already.

The walls are glittering with the awards they’ve won and I imagine the is floor usually filled with tables, seats, and patrons of the popular café, but today it's just duck taped X's, placed 6ft. apart marking where we consumers can stand in line while we sanitize our hands for the 34th time that day. 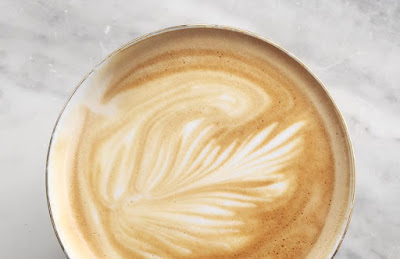 Since we're living in the age of grab and go, I took my americano and apple crostata and sat at the lush Jonathan Rogers Park across the street where I met Charlie with with his latte and GF chocolate & PB cookie.

Tanto of course wanted to share my crostata. I'm sure he'd have the americano too if I let him. He'd ingest anything, that little guy. 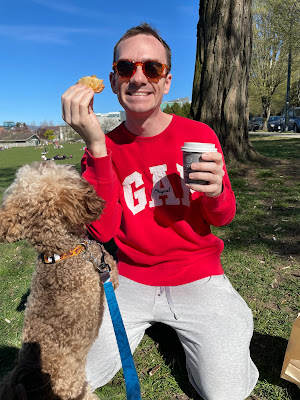 The park is pretty beautiful, with playing fields, a playground, and plenty of spots for resting. There's a neat and vibrant community garden too that's well maintained year round. Favourite part though, this park a popular spot for dogs, so I was more than happy to sit there and take in the sights, enjoying every fluff ball and little barking bitch that passed me by.

I figured if there were any additions to my schedule that I could just Zoom in from my phone like we all do these days. Who wouldn't want to experience this moment of pure joy with me?

Perhaps I could even change my background to New York City. A real Audrey Hepburn moment. It may not have been at Tiffany’s, but whatever it was, it was good enough for now.

Founded in 1984, by Francesco Curatolo, who brought many years of Italian roasting and blending experience to Vancouver.

Milano is now owned by Brian Turko, who underwent a 15 year mentorship with Francesco, and has more than earned his place as a West Coast coffee pioneer. A Canadian committed to his beans.

Brian's blending concepts have created the 'Milano taste' which has been praised by coffee connoisseurs around the globe. His blends have been awarded multiple times by the International Institute of Coffee Tasters (which I didn't even know was a thing).

Milano has 8 locations, 4 of which are in the Lower Mainland, also home to their HQ and roasting facility. The others are in Calgary, Comox, Victoria, and Courtenay.

The staff here are energetic and friendly, the baked goods are delicious and allergen friendly, and the coffee is absolutely worth returning for. If you're craving some 'Milano taste' but the cafe is closed, never worry, you can pick up the beans at a store near you.

Hours of each location can be found here.